The equipment is simple. At the top is my QRP Labs U3S as shown in a previous post, the Bread Pan U3S pictured below. After that a tuner, and an end fed antenna. Read on: 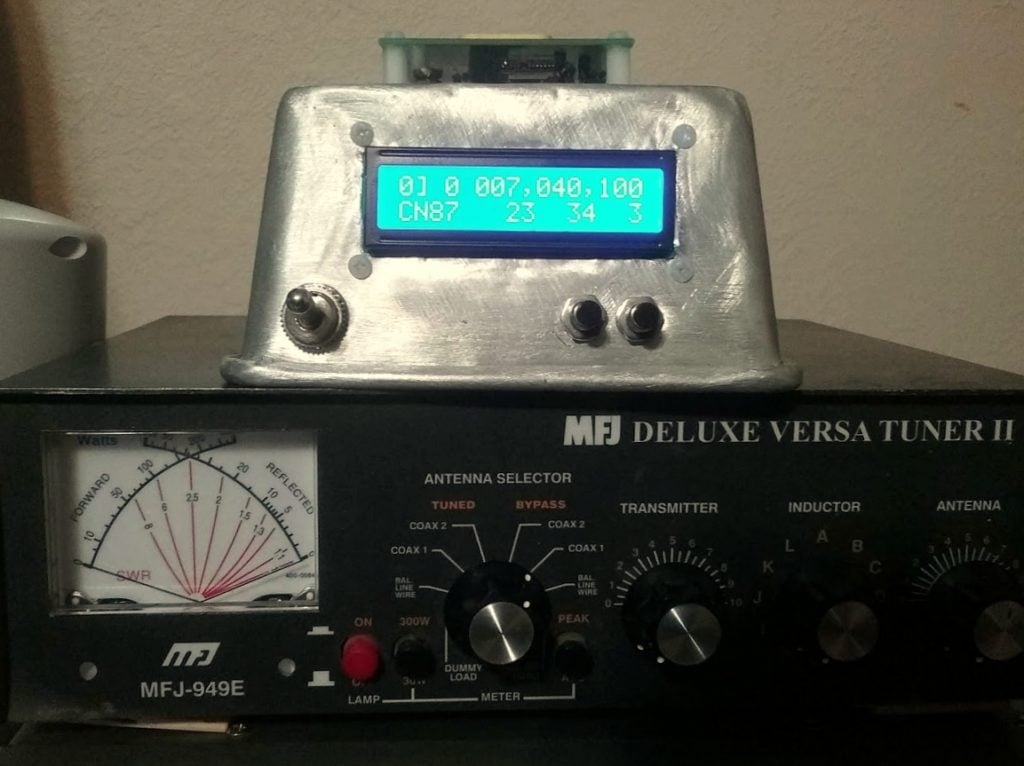 With all of 200mw coursing through its circuits, the MFJ-949E tuner’s meter, set on its 30w range, barely moves upon transmit. 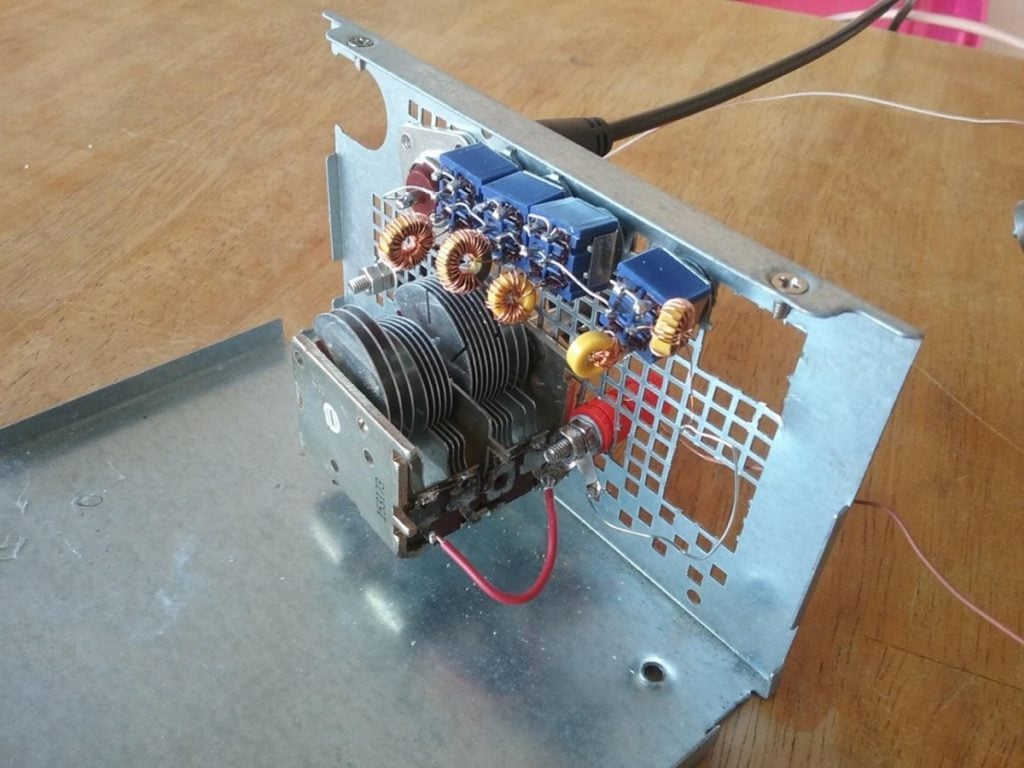 A prototype L-Match tuner based on VK3YE’s design. Who says tuners are inefficient? 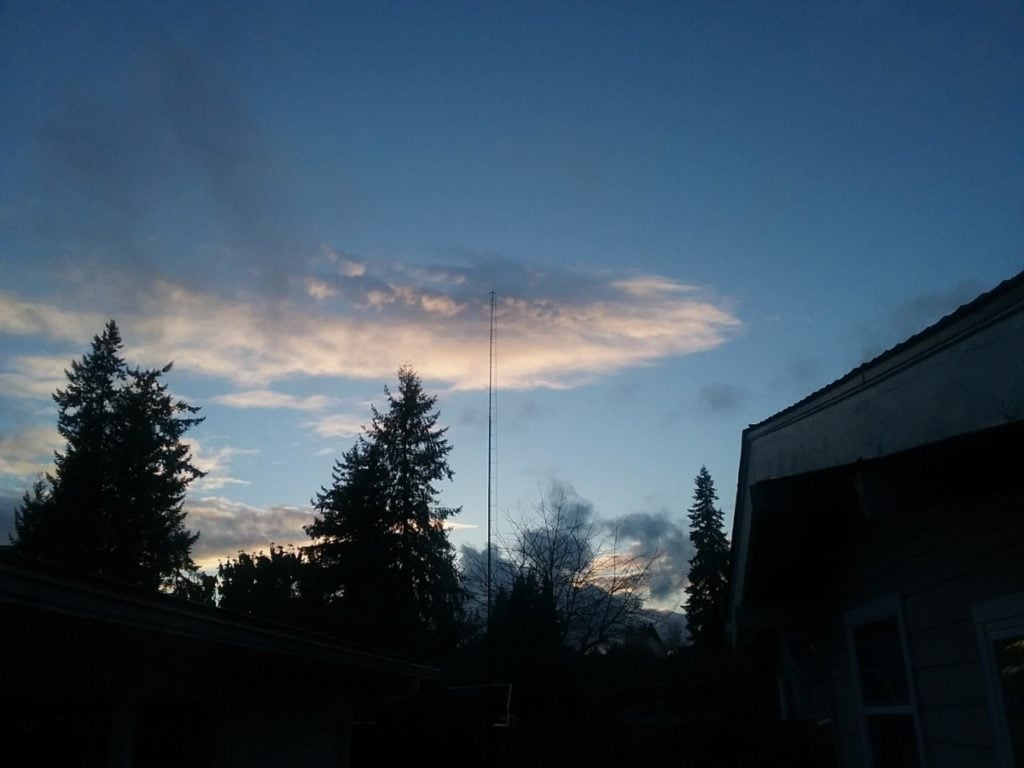 Pictured is my 31 foot mast from Jackite with the G7FEK antenna, but I’m not using the G7FEK right now. See main text

As you can see, I’ve got a very basic setup. The U3S goes into the MFJ tuner which is set to bypass. About 20 feet of cheap coax later the signal is delivered to a homebrew L-Match tuner (as shown by VK3YE- thanks Peter!) and that connects directly to the antenna. The antenna itself is a 66 foot heap of scrap wire taken from an old phone cord, and soldered together in 5 or 6 segments, and then strung up in a somewhat uneven end fed Inverted V on my 31′ Jackite pole. I must say the antenna is quite good for being a quick lash-up, and it serves great as a winter-time antenna that can come down quickly in a wind storm. Only being about 30 miles from the coast, we get some pretty wild winds during the winter time!

First, the raw data from wsprnet.org:

Yep- this wasn’t a fluke or a reporting error- this is repeatable results over the course of 3 days. I did not have the beacon running on the early morning 10-25 (GMT) , and so there were no spots. There are several noteworthy things about the report. First is that the signal drift is ZERO which is fantastic. That’s a lot of stability for a signal transmitted for 2 minutes straight. The U3S is a great rig! Second is that I have seen spots on WSPR down to -28db, while DP0GVN reported the signal as strong as -21db. Third is that this isn’t just any station that reported hearing the signal. There’s a solid reason they’re able to hear my signal. 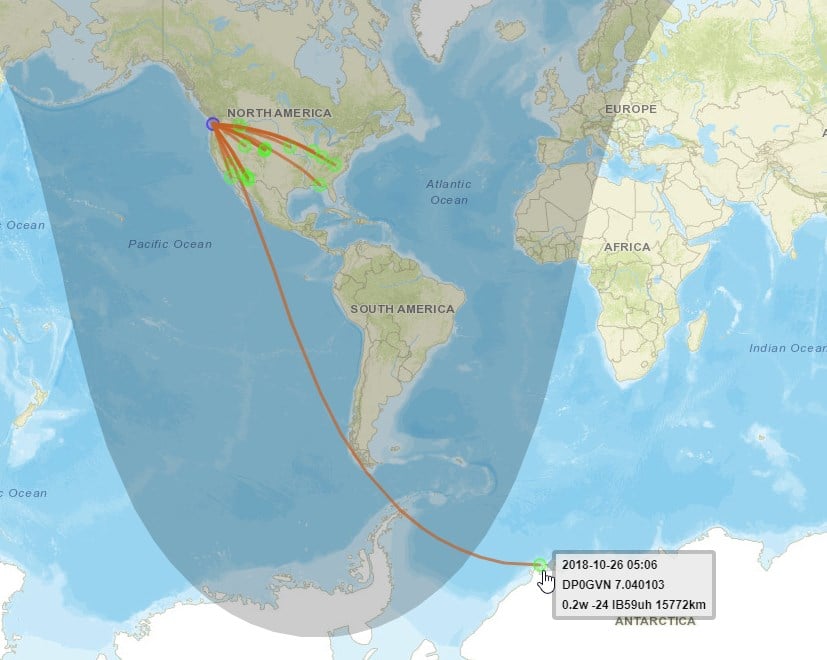 The easy way to answer this is to send you to QRZ where you can check out their bio page. DP0GVN is part of Neumayer Station III, a research station in Antarctica. How awesome is that! This however does explain why, with just a basic antenna and 200mw of power, my meager WSPR signal can be decoded by them even as band conditions are not the greatest.

Noise Floor. They’re in one of the most remote parts of the word with high quality receivers. How do I know they’re high quality? It’s elementary, my dear Watson. Who’s going to send junky radios to a research station on an ice shelf in Antarctica- nobody, that’s who! No, you’re going to take the best you can, nothing else will suffice. I don’t know what receiver they have specifically, but a high quality receiver with a noise floor as low as theirs they can probably hear it when a rat gets electrocuted in a New York subway!

So, does it count for bragging rights?

You bet your microhenries it does! 9800 miles at 200mw of power means that, from a “miles per watt” perspective my U3S got 44,500 miles per watt! That’s not to say that the signal could possibly circumnavigate the globe several times if I cranked up the power to a few watts- hardly. But it’s an interesting metric just the same. Of course, it would be a lot more impressive if a two way QSO was had. WSPR ain’t that- but I’m okay with it. WSPR is a lot of fun, especially when you’re using gear you’ve built yourself or from kits. Until next time, 73!