I recently took delivery of a BangGood Instrument Case, which sells for about $10. Many BITX40 owners have used this case to good effect. It’s big enough for the BITX40 with some room to spare, and the price is right. Being plastic, some consider it inferior as a radio case, but for me it’s a step up from the monstrosity of a plastic case I was using previously. The plastic is easy to cut and drill too.

First and foremost, I had to plan a layout for the front panel. With a permanent marker, I drew a line lengthwise along center of the back of the front panel. This would serve as the center line which the bottom of the LCD would line up with, and the three knobs. I wanted them even. I also wanted four holes under the LCD, so I tried to line those up so that they’d clear the LCD PCB and be half way between the panel edge and the center line. It worked out reasonably well.

I used a spare LCD panel to make sure I had the outline of the LCD correct. One  tricks I use is to use a piece of paper and mark lengths across the edge of the paper and then use it like a ruler and square. This method works surprisingly well.

Once I had the shape of the LCD laid out accurately on the back of the front panel plate, I got to work and started drilling holes all over the inside the perimeter that I’d drawn. I use about a 1/8″ drill bit to do this. I didn’t worry about connecting the holes, and any that were too far apart I went back and drilled another hole between. I used a knife and pliers to break or cut the middle out of the LCD cutout. Then I used a flat metal 90 degree bracket left over from another project, and a flat wood piece from another, and lined it all up in my vice and went to town on it with a flat file as shown below. 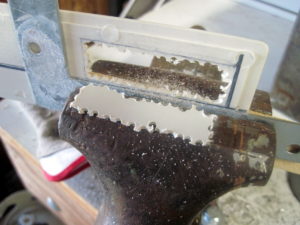 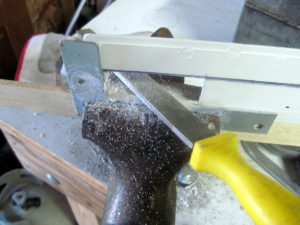 By using an “L” bracket, I was able to line up to do the bottom and one side at a time which came in really handy. Final fitting was done by hand without any guards. Short of CNC cutting, I think this method is very good and I’m pleased with how it turned out. It’s not perfect but for the simple methods used it’s quite sufficient.

The spare LCD, once fitted, was used to mark the holes for the bolts attaching it. Holes were drilled for the rotary encoder and volume pot, and another for a spare potentiometer or status indicator light. It’s unused for now. It took a bit of work with a round file to make the holes large enough because my biggest drill bit was just a tad too small. A file set is invaluable!

With those holes drilled it was time to pay attention to the rear panel.

Early on I decided to use a larger heat sink for the sake of the Digital Modes I’ve been using lately. They use 100% modulation for long periods of time and even at 5 watts they can heat up the IRF510 PA transistor quite a bit with the stock heat sink. 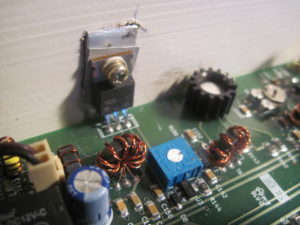 As you can see I used insulators to keep the heat sink electrically uncharged. That’s important with the IRF510 transistor, since the tab has voltage on it. 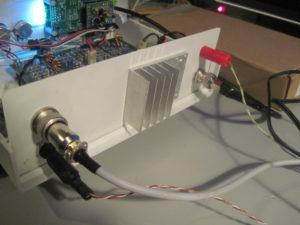 The rest of the connections were drilled and the connectors installed. Since I mentioned that I didn’t have a drill big enough for some of the holes on the front panel, you might wonder how I managed these holes, especially for the giant mic connector. I have been hanging on to a stepping drill bit for some time. I got it to bite into the plastic by leaning the drill back and forth until it bit, and it made quick work of the holes that way. From the back you can see all the connectors and the heat sink. 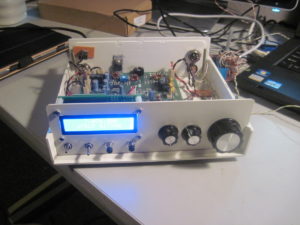 e BITX40 wireup is really simple, but I wanted it to be nice for the new case- I didn’t want wires everywhere. So I spent some time twisting the wires, cutting them to length, and re-soldering them. I also ran them under the BITX40 PCB to keep them out of the way as much as possible.

Power distribution was done with two scraps of PCB hot glued to the bottom of the case and marked + and – with a marker. The left most front panel switch was wired in and powers up the radio by applying power to the positive PCB.

Since the 3.5mm audio jack was too small for the thick back plate, I drilled an over sized hole, mounted the jack to a piece of PCB, and hot glued that to the inside of the panel.

Overall I’m very happy with the end result. The case works, and I only had one major glitch! I neglected to make room for one of the bolts that bolts the case halves together, and so I had to break off the boss on the top half and hot glue the foot to the bottom. It still works fine and you can’t actually tell, but if I had caught it first, the LCD would have been about 1/2″ to the right of where it is. 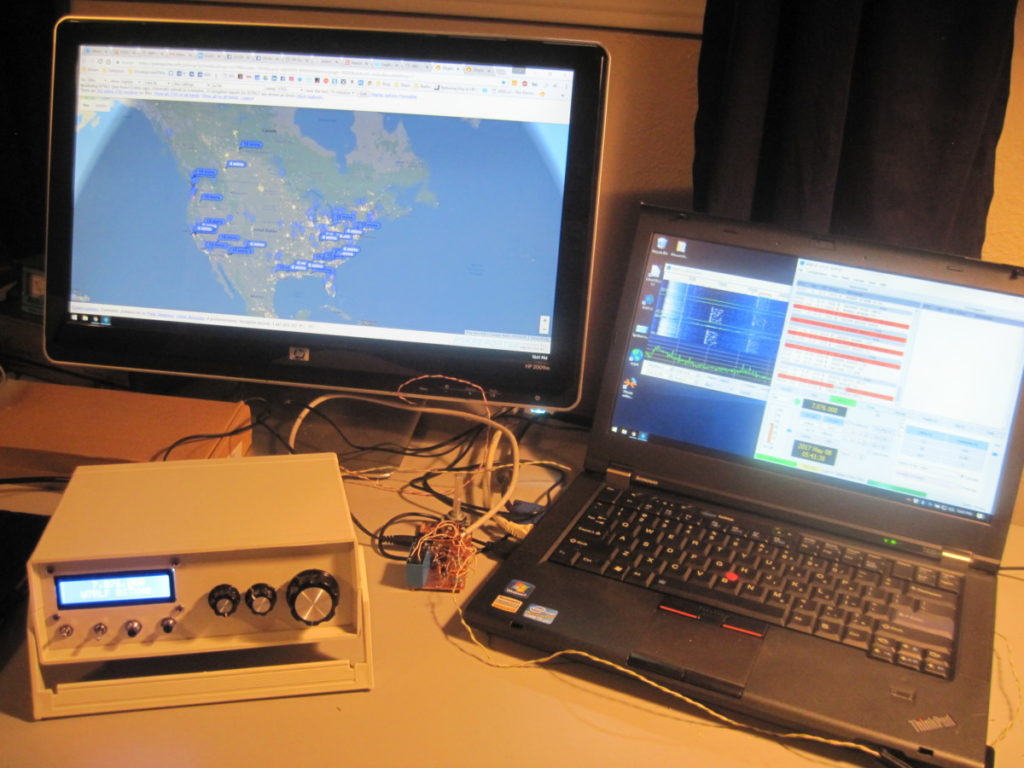 But what about the switches and buttons?

From left to right: Power, Disconnected, Disconnected, VFO memory for the QRP-Labs VFO. The second switch will be used later when I add a 80M Band Pass Filter, and the second button is just there to fill the hole. It may be a status light at some point, but right now it provides symmetry which is as an important task as one could ask it to fill!