Modifying the BITX40 for Upper Sideband 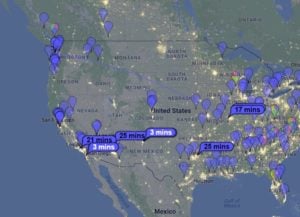 Cool sites like PSK Reports (pskreporter.info) show where your signal has reached.

Last week I posted about adding Upper Sideband to the BITX40, which is not an Upper Sideband radio. Once I got that modification done, I could clearly hear the JT65 signals on 7.076mhz, but… what were they saying? It was time to dive into the world of Digital HF!

Simply put, digital HF radio uses a computer to generate an encoded tone, and another computer at the receiving end decodes it. Radios are connected directly to a computer, so instead of a microphone and speaker, the computer listens and talks. JT65 is one of the many modes of digital HF communications. You’ve probably heard of RTTY and PSK31. Those are other modes, and there are others yet.

Do I need a fancy interface for JT65?

Nope! JT65 is timed precisely. Because of this, you can get away without using a fancy digital interface with PTT switching etc. Since you know exactly when it’s going to transmit, you can PTT manually using a separate switch. Otherwise you’ll need to make a VOX (voice activated PTT) or a Serial PTT interface. Those are not too big of a deal either, and I plan to use one or the other soon enough.

While it’s best practice to use isolation transformers between the computer and the radio, I have been getting away with direct cables between the radio and the computers sound card. It’s ugly, but it works. Now that I have my feet wet in JT65, I’ll definitely invest in this later. There will certainly be a post about it.

JT65 uses a 177hz wide signal- this is opposed to a 3khz wide signal normally used when transmitting your voice. This concentrates your whole radios energy into a very narrow bandwidth signal. And, it’s the equivalent of yelling into the microphone for 46 second straight. Imagine playing with a garden hose when you were a kid. Your friend would run farther away from you, so you’d stick your thumb over the end of the hose, and get this narrow stream of water- but because it’s now pressurized, it goes a LOT farther than before. Because JT65 is narrow bandwidth, it does essentially the same thing. It goes a lot farther than 3khz wide SSB.

This is not without its side effects. The stock heat sink on the BITX40 IRF510 PA on the BITX40 is great for normal use. But when you’re putting out full output for 46 seconds at a time, that sucker gets pretty hot! For this reason I added a larger heat sink. 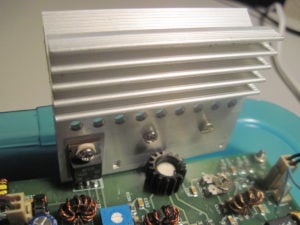 It’s been trimmed since so it fits nicer than in this picture.

This beauty came out of a PC power supply. Modern ATX power supplies produce a lot of power in a small package, and they use huge diodes and MOSFET’s to do it. And those need to be cooled, and they’re the same size as the IRF510 the BITX40 uses. Win! They’re also full of other useful parts. See if you can raid a PC repair shop for their old dead power supplies. Most of the time it’s just the capacitors that are bad in them, the majority of other parts are fine.

Now when I transmit, the IRF510 stays nice and cool. I’ve since trimmed the heat sink so it doesn’t interfere. Ten minutes with a hacksaw and a file cleaned it up nicely. You’ll also notice that I re-used the insulating hardware from the power supply. That’s important, because there is voltage on that part of the IRF510 during transmit, and you don’t want to short things out and destroy parts!

How do I get started?

You need some software for your computer. The recommended package is WSJT-X, which you can get online for free. Mod your BITX40 for USB, hack together an interface, and get going! Get your BITX40 on JT65, and let us know how it goes!