One of the beautiful things about the BITX40 is that it is very hackable. If you want to add a feature to it, it’s almost certainly possible. In a previous post, I showed a quick and dirty way to add 80m to the BITX40 by bypassing the Band Pass Filter. That method works, although it’s anything but optimal. Harmonics can easily escape the radio and cause unwanted interference. To remedy this, one needs to not just bypass the 40m Band Pass Filter (BPF) but to replace it with an 80m BPF. So follow along as we make the BITX40 Dual Band. 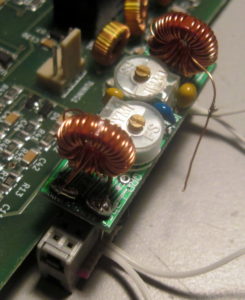 One way to do that is to change the capacitors in the BPF circuit so that the filter is moved to 80m. That’s great, but it’s permanent. I wanted to be able to switch between bands easily. For this reason I decided to leave the 40m BPF in place and augment it with an 80m BPF.

It’s optimal to add an 80m Low Pass Filter (LPF) too, but the 40m LPF is sufficient for the time being. Why is that? Because when you’re on Lower Sideband at 3.8mhz , the VFO is at 12mhz – 3.8mhz = 8.2mhz, which is well above the 40m Low pass filter, and the BPF too. There may be harmonics due to the non-linearity of the PA that make it past the LPF, and that’s not desirable of course. Ideally you’ll want to use the methods outlined here to switch switch in a LPF too.

In the original post, we simply bypassed the BPF by soldering a wire directly to the BPF and across it. We’re going to something similar here.

My original plan was to put both filters in series and then selectively bypass one or the other, but I realized that to be overly complicated. Instead, they are connected in parallel, and one end is switched through one side of a DPDT relay.

The first step was to get an 80m BPF. I chose the BPF kit from QRP Labs. They’re inexpensive and easy to build. Don’t let the need to wind your own toroid transformers bother you. If I can do it so can you!

With that built (which admittedly took a couple hours for my first try) I had to figure out a way to get it into the circuit. The QRP Labs BPF kits had 4 pins on either side of the filter, and are made to plug into sockets on the Switch Kit that they sell. On each side are two ground pins and two “hot” pins. Looking through my parts bin I found an old floppy cable. Each hole on the connector has its own wire attached. Although it’s only 2 pins wide, the center pins on the filter are the only ones that need to be connected. I use the continuity tester on my multimeter to see where each pin went an separated the wires out, and cut the rest of the ribbon cable off. You can see the filter plugged into its floppy cable socket to the left.

Next I had to figure out where to connect the filter. Next to C3, C5, and C7 is a grounding point, so I decided to solder the ground for the 80m BPF right to the ground side of C5. The other side of one end of the 80m BPF was soldered directly to the bit of bare solder on the side of L1 that’s closest to the power connector. Now that the ground and one side are connected, there’s the other end that needs to be connected. And that’s where some work had to be done. 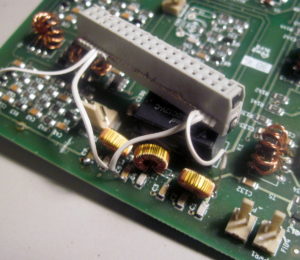 If you look carefully at the photo on the left, you can see that the trace between C7 and C41 has been cut. With that trace cut, both BPF’s are on even ground: They each have a ground and one side connected. The other side is now disconnected and we’ve got to switch in either one of them in, restoring the connection that was cut.

I gently scraped the trace between C42 and the edge of the board, and then tinned it and soldered a wire to it (I’d never done this before so I tried it on a scrap PCB that I raided parts from in the past). This goes to the center of a SPDT relay, and each BPF goes to the other relay poles. I connected the 40m BPF by soldering a wire from the hot side of C7  to the NC side of the relay, and the 80m BPF to the NC side.

I hot glued the BPF socket to the top of the relay next to the 40m LPF to keep it from jostling around.

With the BPF’s able to be switched by powering the relay using a switch on the front panel, 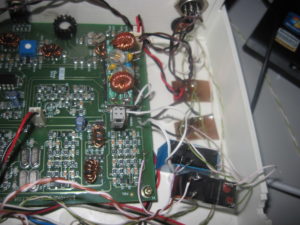 I got to wondering if I could take it one step further and implement automatic switching.

The QRP Labs VFO‘s latest firmware revision 1.04 has the ability to energize a relay, selected by either a frequency limit, or by a memory setting. I updated the firmware and programmed a memory slot for an 80m frequency, and had it energize Relay 4. The only problem was that my relay is 12v, and the output of the relay switch is 5v. So, I grabbed a 5v SPST relay I salvaged from an old TV and put it next to the 12v relay. If it were DPST or DPDT I would have just used it as-is. Eventually I’ll get the right relay, but for now, when I select memory number 8, it energizes the 5v relay which energizes the 12v relay and switches in the 80m BPF. Success!

I must say I really like the QRP Labs VFO kit. It’s made possible a modification that would otherwise be possible with the Raduino but would require some programming that I don’t have time to learn right now. 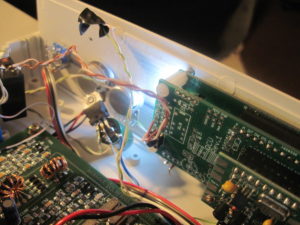 QRP Labs VFO before the relay was connected.

The QRP Labs BFP kit was easy to put together, and using some salvaged parts I was able to make it all work. It came together very nicely and I’m happy with the result. I don’t want to sound like a commercial for QRP Labs, but I am really a fan of pretty much everything Hans does. Next stop: 20 meters!