People often look at the price of the BITX40 and assume that at such a low price point it must be a good entry into HF Radio. But is that really the case? Let’s take a look at a few facets of the BITX40, and you can see if it’s the right radio for you. 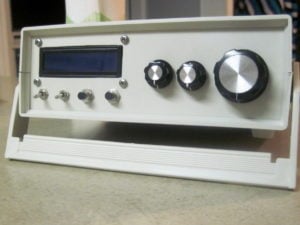 Personally, the BITX40 is my first HF radio. I’d played with 2M/70cm radio on repeaters, but bored of it fairly quickly. I’d always had an interest in HF but didn’t have the license for it, nor the hundreds of dollars for even a used transceiver. When I saw the BITX40 at $45 (Pre-Raduino) I just had to have one. And with the Raduino version being only $59, it’s extremely attractive to folks who like me, are on a budget. The price was right and the simplicity was attractive too.

As far as kits go, the BITX40 is a good starter kit because it’s mostly built already and you get to customize it with your own case and accessories. The soldering is easy and even if you don’t have a good soldering setup, you can still start off inexpensively.  But is it a good beginner HF Radio? That’s a complex question.

The issue here is that the BITX40 is a single band radio that only puts out 5-7 watts of power. That’s why they call it QRP (Ham talk for “lower your power output”). QRP is ususally cheaper because there are fewer components and the antenna system doesn’t have to be as robust. That’s a great benefit and as was already mentioned, draws in beginners because of the lower price.

That lower power and simplicity is a double edged sword, however. Right now the bands are not very good. When they are open, it’s often spotty, and making contacts isn’t easy. I personally found that for SSB the easiest contacts to make were when checking into nets, because there are people specifically listening. Calling CQ is easier when there is 100 watts behind your voice! With QRP not so much. For folks who know well how to eek out the contacts, that’s fine. For beginners who are also learning how to operate on HF, it can be a great source of frustration. For these folks I recommend Peter Parker’s book Minimum QRP: Doing more with under five watt amateur radio. It’s very good.

Another huge strength of the BITX40 is its *hackability*. Adding Upper Sideband is easy, and even adding other bands isn’t horribly difficult. With Upper Sideband comes digital modes. Those are especially suited to QRP. I was able to make a 2600 mile contact to Hawaii on 5w using JT65 recently, and much longer contacts are possible when the band is open.

There are other challenges with the BITX40 that don’t get talked about as much, but are important. First off, it requires that you align the radio. In the hook-up tutorial at hfsigs.com, it isn’t presented as mandatory but it should be treated as such. Thankfully all you need is an accurate (not a Harbor Freight freebie!) ammeter. That way you’ll get the maximum amount of power out of the radio without having to yell into the mic.

Is the BITX40 a good beginners radio? (I think so!)

The antenna system can be very simple. I’ve had great success with just an L-Match tuner and a long wire on a 20′ pole in an inverted V configuration. An Inverted V Dipole works even better! A well calibrated setup will be good for contacts in the hundreds of miles at least, and probably more.

I can say without the shadow of a doubt that the BITX40 was a great beginner HF radio for me. It’s even been a gateway into home brew electronics a little bit and understanding more and more about electronics and RF. I love my little BITX40 and I think you will too.