Can you hear me now?

With my BITX40 in a temporary enclosure and with the PTT switch and Mic connected, it was time to try to make some contacts. I’d tuned the trimmer capacitor next to L4 it so that I could get into the upper part of the US 40M band and ended up being able to tune between 7110khz and about 7280khz, as verified with a Web SDR about 100 miles away from me.

After letting the VFO warm up for a considerable time, I tried making some contacts. Nobody heard me, and a friend nearby couldn’t hear me either. The problem? My 40m dipole. It was 15 feet off the ground at its ends, but only about 10 feet off the ground in the middle where it was unsupported and heavy. Since the middle of the antenna is where the lowewst impedance is, that’s where the most current (aka signal emission) is. And it’s the part that was lowest to the ground. Time for a better solution!

After much deliberating, I decided to go with an L-Match tuner and an End Fed Half Wave antenna, although it has morphed into something that is definitely end fed, but not exactly half wave. The first thing I did was buy some 24 guage black wire, specifically this 100 foot spool. I specifically wanted stranded wire. The plan was to use some of it for the antenna, and some of it for an L-Match tuner. That’s sort of how it worked out. 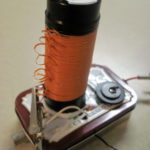 The Antenna Tuner in all its Altoids tin glory

I decided to use an Airborne (that herbal cold killer that dissolves like alka seltzer) container. It’s round and not too big, plus I could bolt its lid to an altoids tin easily. I wound the wire around it, and made a loop every 10 turns and later every 5 turns, so I could strip it and tin it as a connection point for an alligator clip. This worked out poorly. Stranded wire is a bad choice for an L-Match tuner coil. So, I re-wound it using solid 26ga wire salvaged from a 20 foot length of Ethernet cable. A 20 foot length of Ethernet cable has 160 feet of wire in it, after all. Peter Parker’s site, vk3ye.com was a fantastic resource for this project and I highly recommend you check his site and YouTube videos out. His page on the L-Match ATU is here and it’s what I used for building this one. He also helped me decide on going this route for an antenna in the first place, and This Page is also another great resource. If you can’t tell, I’m a big VK3YE fan! 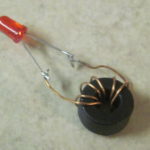 Another thing Peter mentioned to me was an LED power meter. It’s dead simple: A few turns around a small toroid, directly connected to an LED. The LED lights when there’s voltage going through the toroid, and on an End Fed antenna the feedpoint is typically higher voltage than current. Put the antenna through the toroid next to the tuner. After clipping the alligator clip to the noisiest spot on the tuner coil and then while transmitting, adjust the capacitor until you get maximum brightness on the LED. Peter describes it in This Video On YouTube. I’ve made it sound harder than it is, likely.

Excitedly, I set everything up and gave it a try. The LED barely lit. So, I pondered. I tried various things but was not successful. Then, a thought occurred to me.

I was in my office with its metal roof and so didn’t expect any contacts, and didn’t even try. But, I did figure out the problem. I had no counterpoise! I took the wire I’d previously tried to use as the coil, and soldered it direct to the ground (the case) of the tuner, and tried keying up again while making a tone noise into the microphone. The LED was immediately bright, and I was able to tune for maximum brightness. All I had needed was a counterpoise. Success!

I’m not done yet, not by a long shot. I’m not very satisfied with the VFO on the BITX40, although it IS sufficient for making QSOs as many have shown. But, as this is my first HF radio I want more features and less guesswork, so I have a digital VFO kit from QRP Labs on the way, and I’ll write that up as well. I also have a 23 foot pole coming from China to be used with the antenna, and hopefully it helps with good performance of the antenna. More coming soon! Up next though are details on the gear drive on my BITX40, and a cheap hack for knowing what frequency you’re on without a frequency counter.