In a previous post (BITX40: L-Match Tuner for an End Fed Antenna)I built an L-Match tuner using advice from Peter Parker, VK3YE. I also followed his “Tune for Maximum Brightness” RF current indicator. I had indicated that the current indicator worked fine, and I thought I did, but I was not seeing the results I wanted. After re-watching the aforementioned video, I realize that I’d wound something like 6 turns on the toroid instead of the recommended 3! I even knocked it down to 2 to try to get a little more sensitivity. The result was that I can now see how much capacitance I need to add to get a good tune. 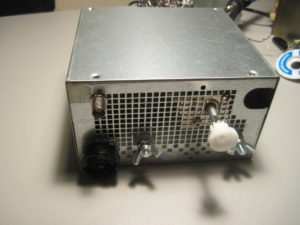 An Upgrade or Two

I was not satisfied with the tuner I’d built though, and certainly not with the capacitor I’d previously used. I bought an inexpensive air variable capacitor on Ebay, but it was obviously far too large for an altoids tin. The PSU enclosure I was saving for the BITX40 case was not being used, and so I decided to use it for the tuner instead.

One side of the enclosure has a grid for airflow, and I was able to use that to mount everything. The LED shroud is simply a soda cap with some tape on it, hot glued to the case. I also made the coil longer and mounted it with hot glue. Screw terminals with wingnuts are for connecting the antenna and counterpoise. 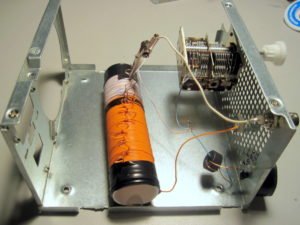 I ordered a 12 position switch to replace the alligator clip arrangement. Once I have it in hand, I’ll install it and also install the lid to the case. Then I’ll  cover the other side of the case with something to seal it off.