This time around we’ll talk about an exciting radio: The BITX40 kit from hfsigs.com in India. More about that in a minute!

The most expensive thing about ham radio is not getting your license. In fact that’s probably the single cheapest part of the whole hobby! Just some study time and $15 to take the test. Radios, cabling, antennas, electronics supplies- they all add up. I’ve accumulated many things over the years and managed to hold on to some of them. So I’ve got soldering irons and a basic understanding of how to solder and to not completely screw things up. 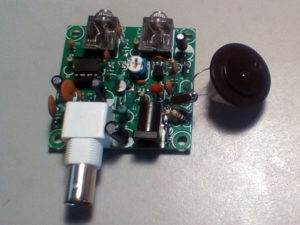 Getting back into 2M radio was cheap: $35 for a radio plus $15 for an antenna for it, and that was it. But for 40 Meter, that’s another story. There are Chinese “Pixie” 40 meter QRP radios that are made for CW (Morse code- Constant Wave) only. I bought a couple of them and put them together, and they work. I put them on 7.040mhz so that I would be able to transmit with my General license, but aside from giving me the confidence to move on to better things, they’re largely wasted money. I’m glad they were only $4 each! 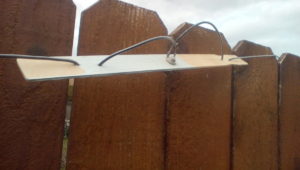 The Paint Stick Dipole, simply hung on a fence.

I don’t have any radios that are useful, and I don’t have an antenna that’s worth anything. I put together what I called the “paint stick dipole” which was just so I could receive CW on the Pixie I built. A paint stirring stick got some holes drilled in it, and a chassis BNC connector was attached to some wire, and it was strung up as a dipole along a fence line. Although low to the ground, I was able to receive just fine, although the antenna wasn’t really tuned.

So, it’s time to step things up and get an actual antenna up, and get an actual radio! Since I’m doing pretty much everything on the cheap, that means building a radio from scratch, or finding one used. Or does it?

Modern Technology to the Rescue!

Enter the BITX40 from hfsigs.com. It’s a 4.5″ by 5″ circuit board shipped from India by a the man who designed the radio, and employs Indian women to help build it. A very cool thing, indeed! The best part? It’s only $45. Farhan, the designer, built it to be hackable. I like to describe it as “the Raspberry 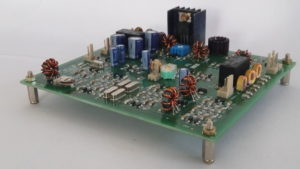 The BITX40 board. Image courtesy of hfsigs.com

Pi of ham radio.” It really is! The modifications you can make are extensive, and it can even be turned into a dual band radio to cover 20 meters as well as 40.

The radio comes as just the built board, and the builder needs to supply a case, and also must wire up and plug in the volume control, tuning, speaker, the whole bit.

My amazing wife ordered the radio for me as a gift, and the radio should be here in a week or two. So, I’ve got to get cracking with all of this.

The first thing is that I need to make an enclosure. Looking at the specs for the BITX40 and at the specs of an ATX power supply, the size looks roughly right. The power supply box is a bit bigger than the board, and it’s also nice and tall. I have a couple of old PSU’s hanging around, and one of them has a nice shiny case rather than the dull ugly grey metal that some use. It’s a high quality power supply but is also very old. I tore it apart, cleaned up the casing, and it’s that much closer to being ready for the BITX40. I’m going to end up cutting out the front of the case, and replacing it with some 1/8″ hobby grade plywood that I purchased for the purpose. That’ll allow me to cut the holes for the controls where needed, and I’ll have enough material that I can do it again in the future when I add a digital display to the radio, and more buttons. It should look very nice with some wood stain on it.

The other thing about the ATX power supply case is that it fits perfectly into an ammo can. Talk about fortuitous! I hope to be able to carry the radio, battery, microphone, and a small antenna all in that ammo can. We’ll see how that goes! 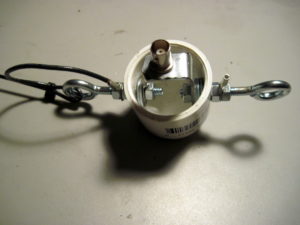 Without the skirt that will keep all rain out.

The other half of the equation here was getting an antenna up. The paint stick dipole was designed to be temporary. I went to the local hardware store (which is awesome. I’m talking about you, Dennis Company!) and picked up a 1 1/4″ PVC cap and an insert plug for it. I ended up cutting the end out of the plug, so it’s just an extension now. The plug acts as a skirt to keep rain out of the thing, and keep the BNC connector dry. This dipole will go up only when I’m using it, so it needs to be very modular.

As for the eyelets, I decided to use the eyelets as the feed points also, and if this causes a problem it’ll be easy to undo.

Next, I’ve got to mount a mast of some sort and get the dipole off the the ground. I’ll need some insulators and some rope, and a mast. I’m eyeing a 10′ piece of 1/2″ EMT conduit for the mast, mounted on a 4×4 fence post. It’s got to be removable though and I have some ideas for that too.