In our last BITX40 Progress installment, I showed you the box contents, and a basic setup that I’d come up with. The controls and connectors were all on the top panel, and it was all loose. Since then, progress has been made! I’ve put up an antenna (more on that in another post) and built an L-Match Antenna Tuner, and I have managed to make one small contact on the BITX40 when I checked into the Afternoon Net on 7268.50 recently with about a 600 mile contact.

From Gears to Dials 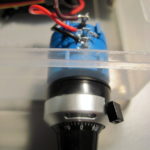 I had hacked together a gear driven configuration for the 3/4 turn potentiometer, and that worked fairly well. I still wanted a better experience than that, so I purchased a 10 turn potentiometer. After installing it I found it much, much easier to tune in a signal. It was well worth it. It has a nice little dial on it that shows you which turn you’re on, and where in that turn. I plan on coupling that with a lookup chart so that I can have an idea what part of the band I’m currently tuned to. Quite handy! Hooking up the 10 turn potentiometer wasn’t hard, and the photo shows the wiring for the BITX40.

BITX40 controls: From Top to Sides 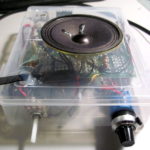 If you’ve been following along with these posts, you’ll notice that everything has now been mounted to the side panels of the box that the BIX40 came in and the previous holes covered with tape. When I had the tuning potentiometer mounted to the top cover, I noticed that accidentally pushing down on it when tuning actually flexed the PCB enough that the tuning change a little bit. So to alleviate that, I mounted the new 10 turn potentiometer to the short side opposite the board, effectively making that the front of the radio. So, I mounted the on/off/volume to the new ‘front’, the power connector to the left side, and the BNC connector to the back. The only thing attached to the lid now is the speaker, since it’s too big to mount inside the case. 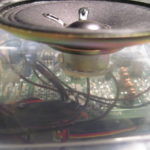 I picked up a hot glue gun recently, and have put it to good use. It’s a high heat gun, not the low heat ones that are made for children to use safely. I used it to glue the speaker to the top cover. The beautiful thing about hot glue is that it conforms to whatever shape you give it, and stays put. But when you want to remove it, it almost always comes right off without damaging anything (unless it’s something super delicate). I can’t recommend one enough. Amazon has them for [amazon_link asins=’B01178RVI2′ template=’PriceLink’ store=’miscdot-20′ marketplace=’US’ link_id=’133588ca-da46-11e6-abbd-59ccf7b3bd65′]. 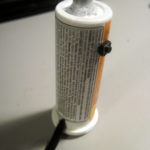 A new Microphone has been made based on this design, and it’s much improved. Check it the Updated Microphone Article.

I used an empty generic Airborne container and a length of Ethernet cable (with stranded cable, not the typical solid) to build a microphone. The PTT switch is mounted to the side. I cut a slit in the container, ran wires through it, and soldered the wires to the switch. Then, I pushed the flat pins of the switch into the slit that I had made in the plastic. A simple friction fit holds it in place. The microphone itself is mounted above a hole cut in the plastic, and held in with hot glue. Did I mention I like hot glue? I like hot glue!

Next on the horizon is a Si5351A DDS kit from QRP Labs. This kit is similar to the Raduino that is now being included in the BITX40 kits from hfsigs.com, although it is not Open Source, and also costs slightly more than the Raduino costs if purchased separately. So, why purchase it? Because it’s shiny and beautiful, that’s why! Plus Hans is just such a nice guy that it makes me want to throw him more money. Or it might just be that WSPR kit saying sweet nothings in my ear…

Once the DDS kit is completed and working, I will also build a proper enclosure for this beautiful little radio, and it might be done on a CNC router. I hope to also be able to include batteries in the case for portable operations. We’ll see how it goes. Until then, 73!