Replacing Relays in the BITX Radios

In this series of posts I’m going to take you on a journey. We’re going to explore the Direct Conversion receiver together, and I’m going to show you every bit of the journey that I can. Let’s get started!

Why build a Direct Conversion receiver?

When I restarted in ham radio in December 2016, it was with my BITX40. It’s a wonderful little transceiver by Ashhar Farhan. I looked at the circuit description and schematic at hfsignals.com and I must admit, I didn’t really know what I was looking at. I understood what most of the components themselves were, and little else. Fast forward to December 2018 and I now understand a lot more. I’ve repaired and modified my BITX40 more than once and have done extensive modifications to it. Some were successful and some not exactly. But each experiment taught me more. Today it has an Arduino based VFO that runs a highly modified/hacked uBITX sketch.

Finally it all came to a head- I want to build one of these things! Some Googling around found many different designs with varying levels of complexity, but none of them stood out to me. In a previous conversation with Ashhar Farhan on the BITX40 and uBITX Facebook group, he mentioned that Experimental Methods in RF Design (not coincidentally, a book partly written by the aforementioned Wes Hayward) had a Direct Conversion receiver circuit example that only has 3 transistors- sounds great! I put the book on hold at our local library (which has a fantastic selection of ham radio books) and waited… and got impatient.

I posted again in the Facebook group looking for suggestions for a circuit to build. Farhan suggested a design that he published in 2007: the DC40.

A first look at the DC40

As its name implies, the DC40 a Direct Conversion receiver for 40 meters.  With just 3 transistors, a few inductors and other basic passive components, a operational receiver comes to life. Rather than tell you all about it, I implore you to read Farhan’s own description of it at the DC40 page on his website.

The first thing that Farhan recommended building is the audio amplifier. I looked around my shack for the specified LM386. I was certain that I had one on and old Pixie board, but I threw those out some time back. Oops! 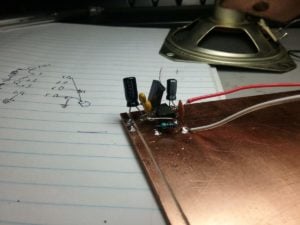 In my collection of things, I found an old AM pocket radio. It it, it had a TDA2822m, which is a stereo audio amplifier chip. I googled around for a mono amplifier circuit based on the TDA2822m, and I found such a circuit at freewiringdiagram.blogspot.com.

After testing it on the bread board, I got out a copper PCB and built it ugly style as shown to the left. But, I feel that it’s anything but ugly. While I want a working radio when I’m done, I also want it to be good looking- we’ll see how it goes!

In this series I’m going to document the build as much as possible, and will describe the changes to the circuit that I’m planning. One big change is that I won’t be using the DC40 VFO, but rather a QRP Labs VFO based on the si5351a chip. Additionally, there are some errors on the schematic itself that will need to be addressed. 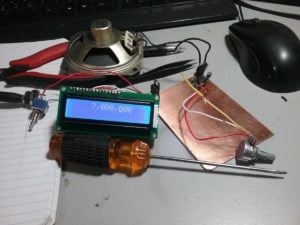 QRP Labs VFO, bare PCB with just the audio amplifier stage and a power strip to the left side of the board.

I’m going to be posting about this in the next few weeks- subscribe to the blog (Top Right corner ^) and get notified when the next installment is ready. There will be a lot of pictures of construction, and don’t worry- I’ll show my mistakes too. 73!