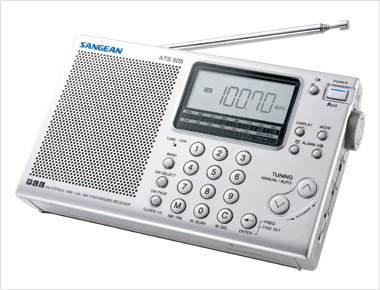 This is what it looks like when it works and has all its parts.

Ah, garage sale season. I love it! There are a number of things I look out for specifically when going to garage sales but I’ve been on the prowl for a shortwave radio for years. Over the weekend, I ran across a Sangean ATS-505. It was in a faux leather case even, and looked to be in good shape. It was marked $7, but they only asked for $5, so I took it! I knew from various perusals that I was probably holding a $80 radio- what a deal!

When I took a closer look later, I noticed that it was missing the battery compartment cover. Okay, no big deal. Some tape, at worst, will fix that. But then I noticed that there was pretty bad battery corrosion on the battery terminals. It was clear that somebody had left dead batteries in this radio for a very long time.

Four AA batteries were sourced, and while I was hopeful that it would power right up, I had adjusted my expectations based on the aforementioned corrosion.

I checked the polarity of the batteries. Yup, they’re correct. I made sure there wasn’t still some battery electrolyte holding up a good connection. Nope, not the problem. The only solution was to do what I’ve always done with broken electronics. Rip it apart!

The first step was to remove the antenna, which was a single machine thread screw and some wiggling. Then all the screws came out of the back. Then, the tuner knob on the side. A bit of work later, I had the back off and I could clearly see the problem.

Can’t get There from Here 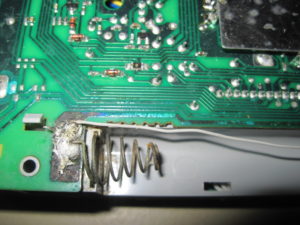 A nice fat trace takes the negative power from the battery compartment all the way across the main PCB of the radio. Corrosion had eaten completely through the trace. Some other traces looked pretty bad too, but my meter showed that they had low resistance (I don’t have a continuity checker on my Harbor Freight Freebie.)

I tore down the radio further, and then used some Pepsi Max to wash the circuit board. Hey, don’t laugh. This is serious science! Studies show that the elevated caffeine content of Pepsi Max increases the efficiency of standard dark sodas against battery acid. I think.

With the battery acid cleaned off, I took a swig of the Pepsi Max. Ah, caffeinated goodness. I dabbed the PCB dry, and got to work. What would I be able to use to repair this corroded PCB trace? I’d need a wire that was small, but also insulated. I pondered this while doing some other things, and then the solution occurred to me. I went to my box of Random Computer Stuff (everybody has one, you know. What, you don’t? Weirdo!) and grabbed an old 40 pin IDE cable. 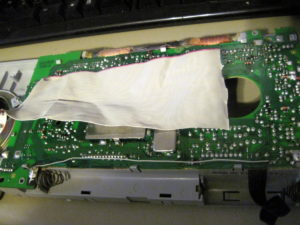 The butchered IDE cable and the new run from the battery compartment to its original destination.

I cut off the IDE connectors, and separated a single strand from the ribbon cable. It’s like speaker wire and separates very easily. I stripped the ends about a trillionth of an inch, and then tinned them with some solder. Next, I soldered one end to the coil spring in the battery compartment and soldered the other end to a component where the other end of the trace was supposed to supply power, but didn’t.

Ok, so I kind of left out a few things. I thought I’d have to disassemble it a lot further than I did, and so I kind of cut the speaker wires in half, and the positive cable from the battery tray to the PCB in half. If I could get it to power up, I’d solder them all back together for reassembly. So I soldered the positive cable together, and put the four AA batteries in place. Mind you, the case was off, and so they were just sitting there with nothing to hold them. They went flying several times.

I put the radio together just enough to see if it would power on. Lo and behold… It did! So I got to work splicing the speaker cables back together, and reassembled the radio. The only glitch I ran into is that the tuner knob broke when I looked at it wrong, and so now it doesn’t have a tuner knob. Thankfully the thing it turns (I think a rotary encoder, not sure) is super easy to turn, and I have thumbs, so it’s not a big deal. I powered it up for the first time with a speaker, and voila! It has sound. The first thing I heard on it was “All about that Bass” which was ironic, since this thing has the bass response of a field mouse.

Here it is in all its glory: 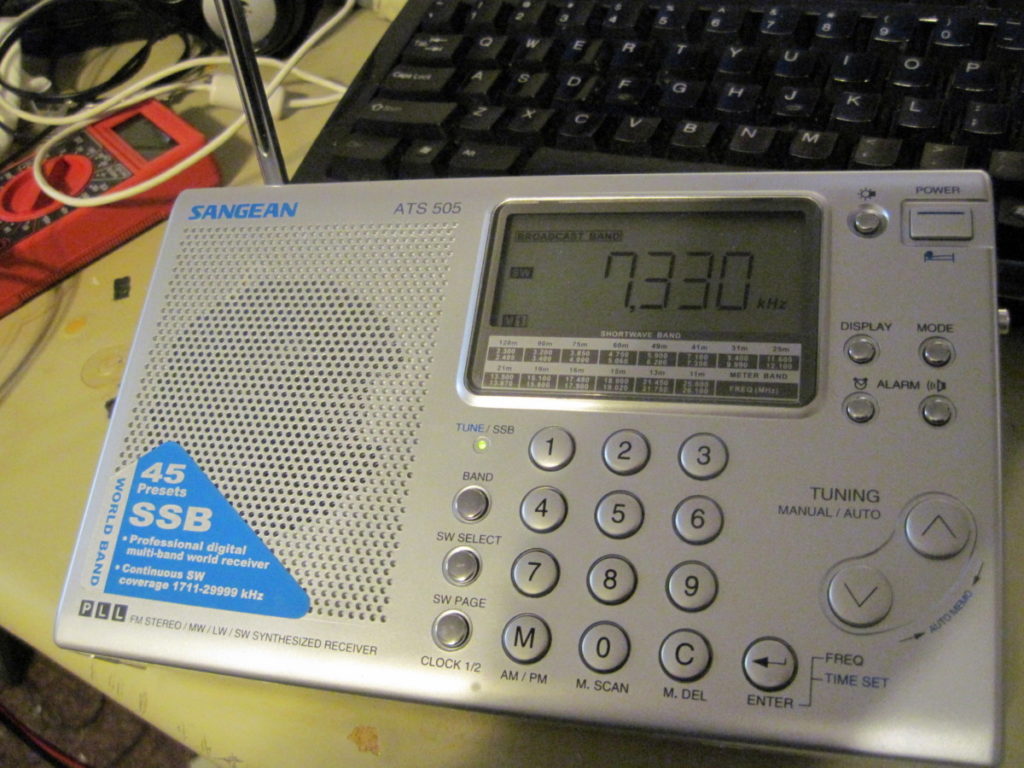