Converting the BITX40 to 20M

The Quest for the Genuine IRF510

I scoured the usual places such as mouser.com and digikey.com, and found that the part was cheap- about $1 USD for a single IRF510. The only problem is that shipping was almost $10, and I’m a cheapskate. My next stop was ebay.com. Some other hams on the QRP Bitx40v3 40 m radio kit Facebook Group cautioned me to look out for fakes. Various things to look out for were mentioned, and so I tried my best to select a seller that looked reputable and wasn’t the absolute cheapest price. I ended up with 5 IRF510’s shipped from the US (rather than China) for $6, shipping included. Surely this was the best deal. Right?

What could possibly go wrong?

I installed the new IRF510 in my BITX40, and reassembled it. With my new DVM in line with the power to the BITX40, I started the tune-up procedure as shown at http://www.hfsigs.com/bitx40v3_wireup.html. With the idle amperage at .19 amps, I turned R136 and RV1 fully clockwise (its lowest setting) and adjusted it until it was at just over an amp with a loud sound into the mic. The problem was that it would bump up to about .6 amps, and then instead of slowly adjusting to 1.2 amps, it zoomed up to almost 4 amps before I unkeyed it! With very very small adjustments, I got it to pull just 1.2 amps on transmit. 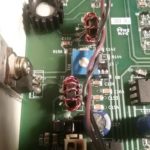 I put the BITX40 back to work doing WSPR which transmits at 100% for almost 2 minutes. On a test transmit, the IRF510 got extremely hot, so much so that I burned myself. The power draw slowly crept up past 2 amps, and if I let it go it would draw even more. While experimenting with it, it suddenly drew about 10 amps, and I heard a crackling sound and saw magic smoke rise from the board surrounding the IRF510 PA. Oh no!

Thankfully only one trace was burned, and it was easy to repair with a bit of wire under the board. I put in a new IRF510 and tried the procedure again. It was also very sensitive to adjustment, and was very quick to overheat. I installed another IRF510 (at least I had a pack of 5, right?) and got the same results.

What’s interesting is that these chips worked, and if I was just using SSB voice, they probably would have been fine. But my primary mode is digital, where duty cycle is 100% for either 46 seconds or almost 2 minutes solid. Pushing these IRF510’s that way showed me that they were not up to spec. I began to suspect that they were not genuine, but counterfeit. How could I prove it, though?

The only way to really know if I had counterfeit IRF510’s or not was to compare against known-good chips. I am fortunate that a fellow ham who is in the industry supplied me with genuine IRF510’s direct from Vishay Semiconductors. The first thing I did was visually compare the ebay IRF510’s with the ones direct from Vishay. 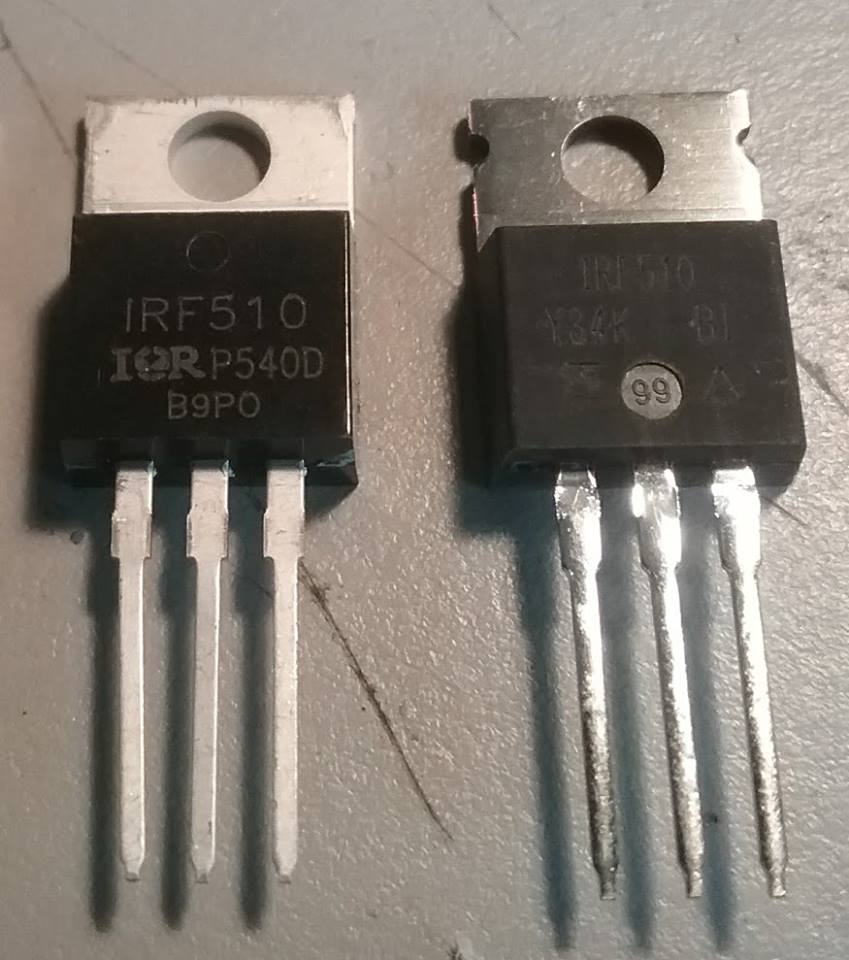 Which one is real?

I posed a question on the Amateur QRP Radio and also  Bitx40v3 40 m radio kit Facebook groups: Which is fake, and which is real? Many folks responded. For the one on the right, it was said that it was fake because of the tinned leads, thin heat sink, the writing on it, and more. The one on the left was said to be fake because of lack of notches in the heat sink, the writing looked stamped instead of etched and some other more vague reasons. Out of 37 direct votes, 21 people chose the one on the left to be the genuine IRF510, and 16 people chose the one on the right to be the real IRF510.

The Proof is In The Pudding!

I’m happy to report that the first IRF510 that I tried from the batch directly from Vishay worked beautifully the first time. It tuned right up and it was a breeze to set the bias as previously described. It has since transmitted JT65 successfully, and does not overheat or draw excessive amperage. It truly is the genuine piece.

Get on with it!

Yes yes, okay. Here you go. The specimen on the RIGHT is the real deal. Its shiny metal, poor markings and the fact that it doesn’t cast a shadow are poor indicators of its authenticity. It’s the genuine article straight from Vishay, and more than that, it works as it should.

How can you avoid getting a counterfeit (fake, relabeled) part? It’s easy: Buy it from a reputable seller. And I don’t mean ebay. Stick with Mouser or Digikey or another retailer that you trust. It’s all about the supply chain. There are some genuine IRF510’s that look like the one on the left too. Looks ARE deceiving, and it’s impossible to choose the correct one just by appearance. Also: too good to be true IS too good to be true.

I hope you found this article informative. Feel free to leave your comments below. In the mean time here are a couple of interesting links to articles and videos about fake semiconductors: