An Inexpensive Digital Multimeter for the Thrifty Ham

When playing with ham radio or any other electronics, it’s pretty obvious that you need a Multimeter (DVM, Meter, whatever you want to call it) and if you’re like me, you’re on a bit of a budget. For me, I wanted to accurately set the bias on the IRF510 PA in my BITX40. This requires measurements down to 100ma. The power draw of the BITX40 on receive is less than 200ma, but my cheap Harbor Freight meter said it was drawing over 1 amp! Clearly it wasn’t. It was time to go shopping for an inexpensive digital multimeter

I decided to try the other meters I own. One came from a garage sale, and another from a friends estate sale. Both happened to be the same Craftsman model, roughly a $30 meter. Both of them also gave highly inaccurate meter readings. I borrowed a Fluke meter from a friend and used it to compare readings. Out of the 4 meters I own, none of them measured current with any accuracy, giving readings 2-4x higher than the Fluke.

The Solution: An Inexpensive Digital Multimeter

I went on the prowl on Amazon and pored over the reviews for an inexpensive Digital Multimeter. It had to have an accurate ammeter. Rather than bore you with all of the things I found that got bad reviews, I’ll cut to the chase. I bought the Innova 3320. 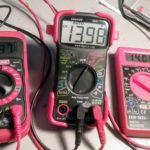 Comparing voltages. Sad that the Harbor Freight meter is more accurate than the Craftsman! Innova 3320 in the middle.

What really sold me on it, besides the great price that I could actually afford, was this particular review in which the reviewer compared the Innova 3320 with a Fluke 87-5 and a Fluke 179 and posted the results. Additionally, he owned the Innova 3320 for 5 years and could speak to its longevity.

Because I have Amazon Prime, it got here in just a couple of days. There’s more benefits than just the 2 day shipping, although that really is nice.  If you haven’t checked it out, I recommend it. Click here to try an Amazon Prime 30-Day Free Trial

On opening the package the first thing I noticed was that the meter has a huge display compared to others I owned. Secondly, the meter has a built in stand that easily props the meter up so you can see it while working.

I compared it to my friends Fluke, and got results as good as those the reviewer did. I’ve since been able to use it to adjust and test the PA on my BITX40 as well as do the usual resistance and voltage checks you would expect. For the Radio Amateur, it is clearly missing the ability to measure capacitance and inductance, but this is an inexpensive digital multimeter, and for the price and performance of it, it’s a fantastic deal that I’d recommend to just about anyone, especially to someone looking to upgrade from a Harbor Freight freebie meter.

There are two other things that make this a great meter: First, it has a 10M Ohm input impedance on the voltage meter. This means it won’t load the circuit you’re testing, which affects the reading. High impedance gives more accurate results. Secondly, the Innova 3320 has auto off so that the battery lasts a nice long time. There’s nothing worse than grabbing your DVM than realizing it’s now useless because you forgot to turn it off last time.

So, go check it out. The Innova 3320 is a great meter that’ll serve you well without breaking the bank.

What’s your favorite meter, and why? Leave a comment below!