The QRP Labs U3S is a multi-mode transmitter kit. It outputs 200mw of power on any band you have a filter for, and is extendable to up to 6 bands that it can rotate through. It’s only $33 and is incredibly capable. Let’s check it out! 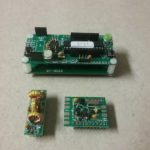 I received the U3S in April 2017, but was fairly busy with my BITX40 and so the kit sat for a while. In late June I assembled it and started fiddling with it, but wasn’t able to get it on the air, and shelved it until I had more time to troubleshoot it.

Fast forward to late September, and I’ve finally had some time and brain power to dive into the world of the U3S and figure out how to get it on the air. Since my earliest efforts failed, it took me some time to get the gumption to give it another go. I’m glad I did!

Construction is easy if you follow the manual closely. The hardest part is the Low Pass Filter and the PA toroid transformer. Both are actually fairly simple and straightforward, but are likely going to the the source of most “Gotcha”‘s. There again, the manual is very helpful. For the Low Pass Filter toroids,

I found it easy to wind many windings, take a macro picture with my 7″ Samsung Tab A and then make it bigger on screen so I can count the windings and adjust as necessary.

As an aside, I can’t say enough nice things about the Tab A. I take every picture on this site with it. The pictures are fantastic, and with Google Photos, the images are immediately available on my computer so I can add them to the blog without any fuss. Gotta love it.

With the U3S, and especially WSPR, calibration is everything. The right frequency at the right time is vital to be spotted on WSPR.

The U3S Manual is amazing and covers calibration quite well. I used WSJT-X and my IC-706 MKII to do the calibration.

I set the output frequency on the U3S to 10.1mhz, and tuned my Icom to 10.05mhz. I then adjusted the Clock Ref until the line was straight at the 500khz mark in WSJT-X. Now, the displayed frequency will be correct on all bands. 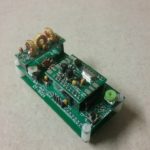 Then I moved on to calibrating the system clock. I used the same method as before, but at 20mhz as the manual indicates. To find the frequency of the 20mhz crystal, I tuned to 20mhz on Icom, and tuned it until the 20mhz oscillator could be seen at the 500khz mark in WSJT-X. Take the value on the Icom, add 500khz, and Bob’s you’re uncle. Now the clock will be reasonably accurate, and according to the manual, will stay this way for about a week at a time.

There’s no need to set the clock when you start the U3S. I have a switch on mine, and I turn it on exactly 4 seconds before the next even minute. Since it takes about 4 seconds to boot, this results in a correctly calibrated clock. Remember, it doesn’t have to be the correct time. WSPR doesn’t care what hour it is, or what minute it is- just that it transmits at the correct 2 minute intervals, synced with an exact clock.

Now that I had calibration out of the way, there was another problem plaguing me. I could ‘spot’ myself on the Icom and WSJT-X, but was getting no other spots, even after I connected my 40m dipole (Which is my 20M Dipole, extended appropriately). Clearly, the signal was not getting out past the PA.

Since it was about 3 months since I last messed with it and I didn’t remember where I left off, I decided to disassemble it, refer to the manual, and check my work. I wasn’t getting continuity in several places. All was fine, except for the jumpers at W2-W3 and W0-W1. I had, without thinking about it, used trimmings from the toroid winding and construction as jumpers! Those are enamel coated, and not really the right thing to use. I de-soldered them and replaced them with trimmings from a resistor. Thru-hole part trimmings are really handy to keep after construction.

With continuity out of the way, I tried transmitting. No bueno. After a bit more Googling and finding some relevant posts on the QRP Labs groups.io discussion and support group, I saw a suggestion to bypass the Low Pass Filter with a wire jumper just for testing. I did so, and waited.

Immediately after the next transmission, I got several spots! So the Low Pass Filter was the problem.  After re-heating every solder joint on the Low Pass Filter, I had continuity through it, and it after reinstalling it, I am still getting spots. Problem solved! 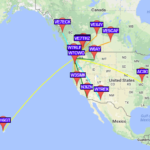 While I’ve only had the U3S on the air for a couple of hours now, I’ve been rather impressed. The signal was spotted twice in Hawaii, which is a 2600 mile trek. 200mw power, 2600 miles… that’s 13,000 miles per watt. Wow. The U3S is in a temporary “enclosure”, if you can call the cardboard box it came in such a thing. It’s also being powered by a re-purposed 8000mah laptop battery going through a LM7805 voltage regulator. I think the battery will last a long time in this configuration.

My eventual goal is to hide this in a place in my town or slightly in the forest and see how long it continues to transmit- it should be fun! Perhaps I can make it solar powered or find some other way to keep it going for a long time. If/When I do such a thing, I’ll be sure to post about it. In the mean time check out the U3S. It’s a lot of fun!