This will be my first work partially authored at subsonic speeds at 33,000ft. I can see Lake Tahoe from here. Well, I could a minute it’s ago anyway.

My employer has asked me to join them at WordCamp 2017 in Los Angeles, and so right now I’m aboard a Delta Airlines Boeing 717-200. I’ve flown in this type once before in 1984 when it was better known as the DC-9 or MD-80, depending on how old the aircraft was then. I was a child then, so you’ll excuse me if I didn’t note the model number. 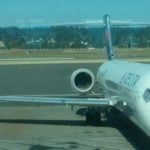 As a remote worker, opportunities like this are somewhat rare and treasured. For WordCamp I’ll be meeting my boss in person for the first time, and another co-worker who I’ve know for a few years, as we’ve worked together at two different companies, for the first time. This weekend also marks other firsts: Staying at an Airbnb for the first time, and attending my first tech conference As long as today doesn’t include my first emergency landing or mugging in LA I will be quite happy.

Air travel for this Man Of Largeness is always a cause of anxiety. I must say though that my worries were unfounded. I fit fine in a standard coach seat, and by sitting next to the emergency exit, there is no seat to my left, and the aisle to the right. I credit my boss for this stroke of genius in placement! I have also had a much easier time with the seatbelt than on my previous flight, a Southwest B737-800. So if you’re a fat person looking  for a decent flight, take note!

Another source of anxiety was of course security, but that was far easier and faster than I expected. Last was my luggage. I like to travel light, but this is an all weekend trip, so more is needed. We already needed a backpack for our families emergency kit, and I thought this would be a great time to kill two birds with one stone. 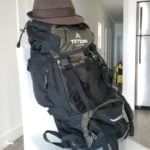 I went to Amazon and looked around for a cheap but good backpack with great reviews, plenty of room, and not too big to be carry-on luggage. I ended up with the Teton 3400. This thing is, in a word, cavernous! There’s plenty of room in it but also plenty of room ON it. Many attachments for bottles, bags, food, maps… It’s endless! And it was no problem getting it on the plane. At six feet plus an inch with a long barrel of a torso, and Not Lightweight if you know what I mean, I was concerned that the Teton 3400 would not be comfortable. That concern was also unfounded! It adjusts for pretty much anybody. Another nice feature is that the portion of the brace that goes around your torso is removable. It’s definitely not needed for this travel, but will be reinstalled when I return home. So if you’re looking for a high quality “do anything” backpack, check out the Teton 3400.

The Captain just announced the descent into LAX, and the seatbelt sign is on. Time to put the tablet away and get ready to go. 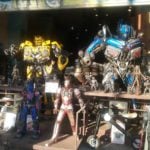 Today is a day of resting from the previous days travel and getting acquainted with our coworkers in person, and a little bit of sight-seeing. We stopped at In-N-Out for lunch and made a point to order from their Secret Menu. 3×3’s, 4×4’s and Animal Style. Say no more!

The highlight of the day was a long stroll down Venice Beach. Street performers and artists, oddball shops and tattoo parlors, trendmongers, and people everywhere. I wondered at times if this is what Burning Man is like. One pervasive element I could have done without was the giant amounts of marijuana being smoked. Apparently some people feel it is impossible to be different, artistic, creative, or relaxed without lighting up a joint. 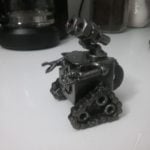 At some points, I resorted to holding my breath in order to avoid getting stoned just from second hand smoke.

Our destination was Titanic, a boutique selling, among other things, really insanely cool metal sculptures ranging from a small R2D2 or WALL-E to giant seven foot tall Alien, Predator and Batman. Or 9 foot tall Transformers.

The amount of detail on any of these is staggering, and it’s hard to walk out of the store without buying something! I couldn’t resist buying a little WALL-E. He’ll make a great desk companion!

For dinner we ended up at a Korean Ramen restaurant, where we dined on a deep fried octopus appetizer,  and later we stopped at a taco truck. It was delicious!

Not. Enough. Coffee. For this Late Nighter, it was rather difficult to get up before 7am and be at WordCamp LAX 2017 by 8am, when vendors are expected to have their booths set up. There were many talks to attend, although I only found time to attend two of them over the next two days. Lunches were provided and they were decent enough, but not anything exceptional. Interestingly, the vendor booths were located outdoors on a covered deck. Welcome to Los Angeles, right? My favorite part about being at a vendor booth for my employer, A2 Hosting, was meeting our awesome customers! In support, it’s all too easy to forget that your customers are Real People who have Real Jobs and feed Real Families. Meeting them in person is very humbling, and quite a privilege.

Another thing that was great was meeting many others in the hosting industry. Yes, they’re competitors right now, but hosting is a small industry with only so many players. Chances are is that tomorrow you will be working with today’s competitor. Never burn a bridge, and know where your friends are!

While WordCamp LAX 2017 was an entirely new experience for me, there was one thing that stood out as a personal first overall: A customer who runs a WordPress based hosting review site and podcast asked to interview me for his podcast. Holy smokes! Quite a privilege. Once it is posted, I will link to it here.

A Culinary Tour of the Middle East in Los Angeles 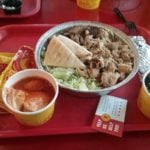 As if there were not enough firsts, my host, boss, and overall awesome guy Jay, who is of middle eastern descent, took my coworker Maria and myself to several amazing but inexpensive restaurants. The Halel Guys, a Persian Ice Cream parlor where Date ice cream and Saffron Pistachio ice cream were sampled, and a Lebanese bakery where I tried baklava. Another delicious first.

And thanks to The Halel Guys, I now know what real delicious hummus and falafel tastes like. I even tried tabboulleh! All of it was a very special treat. And the mexican seafood restaurant… wow.

Wordcamp LAX 2017 was a giant success, and I’m looking forward to the next WordCamp. I also found that I had a lot to say about the talks I went to, and I have enough to say that I may consider at least attempting to speak at a future WordCamp. Thanks A2 for sending me and for the awesome volunteer staff at WordCamp LAX 2017 for a great event!