TL;DR: This is the worst electronics purchase I’ve made that wasn’t at the Dollar Store. Do not buy cheap Chinese tablets on sketchy websites. You get what you pay for. If you want a quality tablet, go buy a Samsung. You’ll spend more but you’ll get your money’s worth. 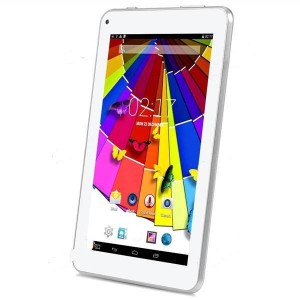 If you’ve spent time looking at some of the Chinese import websites, you’ve seen what appear to be screaming deals on hardware. I needed a backup tablet to do some basic tasks that my not-quite-Android Kindle Fire HD 6 wasn’t capable of. So, I went searching at Everbuying.com for something cheap. The last time I’d looked, around October 2014, I was pretty unimpressed. But this time, in April 2015, I found an unbranded H701 Quad Core Android 4.4.4 tablet with a 7″ IPS Display for a measly $50. Sounds too good to be true, right? Well, it’s not. RockChip’s RK3126 chip came out in November 2014 and is a low end Quad Core ARM SOC (System On a Chip). Combine that with some low end specs such as 512mb ram, 8gb of storage, and a surprising 7″ IPS display, and you’ve got a $50 tablet. And yes, it actually works! Lets be realistic though- it’s not a high end tablet. For that kind of price there have to be some pretty serious compromises made, and there are. Do they affect usability? What are they? Lets take a look!

Take a look at a few pictures of the tablet. It’s fairly nice looking and doesn’t look cheap, unless you compare it directly to a higher end tablet.

If you read tablet reviews around the web you’ll see all sorts of statistics, benchmarks, and specifications. I’m not going to do most of those. Instead we’ll just focus on usability and the quirks and see where it lands us in the long run.

Can there really be good in a $50 tablet? Oh yeah, there’s some good. Historically, super cheap Chinese tablets had horrible displays. Not so here. This display is 1024×600, and the In Pane Switching (IPS) means that its viewable from most angles. The resolution is sharp, and I was delighted with the display. It’s not as high resolution as my Kindle HD6 or my wifes Kinde Fire but it’s every bit as usable, and videos look great on it. I can’t find any fault with the display.

As for touch sensitivity, it’s not as good as some others but its perfectly usable and doesn’t feel clunky at all. It doesn’t register a touch here and there, but its not a deal breaker. Had I not used other tablets, I doubt I’d notice it.

With the quad core processor, it’s reasonably fast and I haven’t had any major slowdowns with it. I also have not loaded it up too badly. But, it plays Angry Birds just fine, and works great with any other app I’ve loaded on it. This is a *very* usable tablet, folks.

You’re not going to pay $50 for a tablet and not run into some compromises in quality or performance and features. The cameras on this tablet are all but useless. At .3MP for the front and back (That’s point three), they will capture an image, but it’s not going to be very good. They are there just so that the manufacture can say “look, it has a camera!” and nothing more. Its not overly useful. It’s better than nothing, but barely.

Skype is not usable with audio or video. The call I did on it was horrible for the other person, as there is no noise cancellation and they could constantly hear themselves talking. So, if you’re wanting to do Skype video or even voice calls, look elsewhere. There’s not even Bluetooth to connect a headset.

The charger that the tablet came with is *very* light. Typically, light means few components, and in a power supply that is not necessarily a good thing. I opened it up and examined it, and while the build quality looked good enough, I won’t be using it. I have other chargers that I can use without worrying about burning my house down.

So far, none of these are showstoppers. But wait. There’s more.

The UGLY (but tolerable)

Battery life? What battery life? Initially the battery lasted about 20 minutes on a full charge. After draining the battery, then charging it overnight with the tablet off, then charging it again for a few hours with the tablet on, it finally registered 100%. Only after a few cycles was the battery capable of holding a useful charge. The average consumer will have much, much worse results. It will last on standby for about 10 hours, possibly longer, before shutting off. What about actual usage?

To test the actual battery life while watching a video, I started with a fresh charge and opened up YouTube to my favorite silly video which just happens to be 10 hours long. I don’t have a very fast Internet connection, so it took a while to load- in fact it took a lot longer that it seemed like it should. Within the first few minutes of messing around getting a video to load (which I don’t think is the tablets fault, really) the battery dropped down to below 70%. When the video started playing, it was at 65%. It then stayed at 65% for about 20 minutes. It then played the video for about 2 hours and 20 minutes before powering down automatically. While it falls short of the advertised 3 hours, it’s a lot better than I expected.

Two things that affect battery life significantly are CPU use and brightness of the display. During the test, the brightness was turned all the way down, which really is fine and that’s how I leave it for general use. The brightness adjustment does not go very low, and I would see no reason to run it at full brightness in most situations.

What it really comes down to is yes. This is a working tablet that does what tablets do, and does it relatively well considering the price point. Yes, the battery is garbage. The build quality is decent but not stellar. For my intended purpose (running some Android-only apps that my Kindle HD6 won’t run) it works fine. I would not buy this as a gift or as an only tablet. It’s a great backup tablet, and not much more.

I did pop open the tablet and found that the battery is a 2000mah battery. It was advertised as a 1800mah battery, but given its actual performance, I doubt it rates much higher than 800mah. I have found some 3500mah batteries online for about $10, and am going to be swapping it out in the future. We’ll see what this does to the battery life. But then, it won’t be a $50 tablet anymore!

And about it being a $50 tablet: The tablet was shipped direct from Singapore, and the packing slip had a statement that declared it as a non-retail sample with a declared value of $24.92 USD. That’s a pretty tricky probably-not-legal way to get around import laws. I did more digging and found that in lots of 10,000 units, these H701 tablets cost, you guessed it, about $25 USD each. Furthermore, I bought from Everbuying.com. They have really bad reviews online, but a coworker has used them so I thought “How bad could it be?”. When I purchased it, they sat on the order for several days with it marked “Processing”. Being fairly impatient, I contacted them and they got back to me less than 48 hours later. The tablet was sold out, and I was invited to either wait for more stock to come in, or choose a different tablet. By the time I chose a different tablet, they had it back in stock and shipped the H701 tablet as originally planned. The moral of that story: Don’t be in a hurry when ordering. The customer service was decent though, but I would not want to test them on a return or refund.