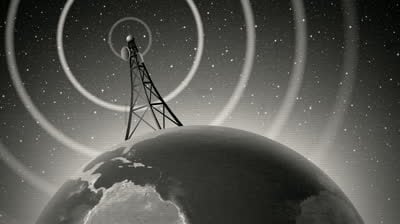 One of the amazing things about Amateur Radio is that you can turn the hobby into whatever you want it to be. You can  spend thousands of dollars on all the latest gear with a 130 foot tower with giant beams atop it. OR…. you can spend as little as possible and have at least as much fun as the guy who spent his children’s inheritance on radio stuff, possibly a lot more! In this post, we’ll explore a HF Antenna option that will perform great for its size and won’t require pouring cement!

The Jackite vs Ebay pole comparison showed you how you can spend a few bucks and get a good single or dual band HF antenna. You can spend about $25 to turn the Jackite 31′ pole into an all-band HF Antenna that will give you all bands between 80 and 10 meters, without a tuner. There are mods for 160m and it might even work on 6m with some tuning. Lets get started!

First off you have to know that I didn’t invent this. As the heading suggest, it was designed by Mike, G7FEK. It’s what some call a “Nested Marconi” antenna. The average HF Antenna uses elements that resonate on one primary frequency, and then at its multiples. For example the 20m Inverted V will work on 20, 15, and 10m because those frequencies all ‘fit’ on the antenna at even multiples.

But the G7FEK is not your average HF Antenna. It uses two vertical segments and two horizontal segments that happen to be tied together at the bottom to resonate on different bands on different segments. His site goes into great detail about that, and I encourage you to read it.

I’m not really going to tell you a lot about the antenna itself, except about how I implemented it and what results I’ve had. GO HERE and read his site, and also make sure you read all the comments and the Construction Guide. There’s a little bit of conflicting information on there. The Construction Guide tends to be more accurate.

You need about 100 feet of wire in the air, and about half that on the ground. For the ground wire, I just used some stranded 14ga wire that I bought at a garage sale. In the air though, that’s quite heavy and so I used Remington Industries 24ga stranded wire for that. A 100 foot spool is cheap on Amazon.

Also called for is ladder line. Holy smokes, that stuff is expensive. What’s ladder line except two wires held apart by an insulator? My solution: Coffee stirrer straws (7″ not 5″) and high temp hot glue. And yes, it works.

The 7 inch stirrer straws are perfect. In full length, they act as the ladder, and in half length they make a good rung. I linked to Amazon for them but really I bought all I needed at Wal-Mart for about $2. What I did was cut many straws in half, so I had dozens of 3.5″ long straws, and glued them perpendicularly to two 7″ straws to make a ladder. When the glue was cooled, I cut those into short ladder spreaders as shown below.  Then I  threaded the wire through the straws, straw-rung-straw-rung until I had 25 feet of ladder line. Here’s some pictures to give you an idea: 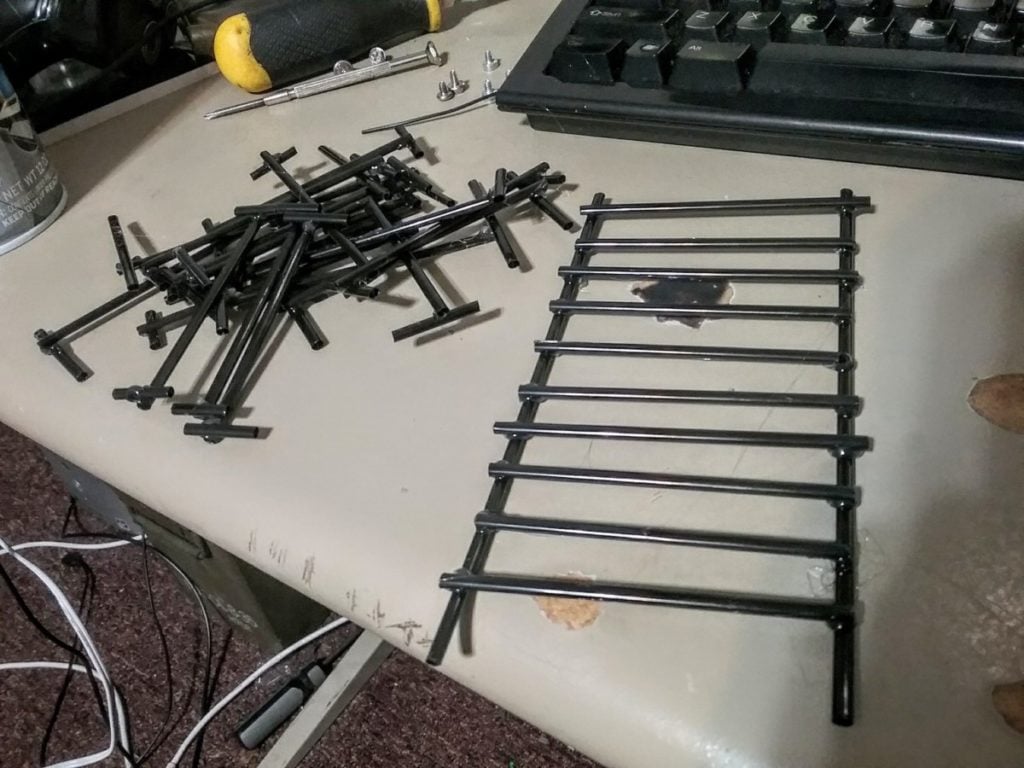 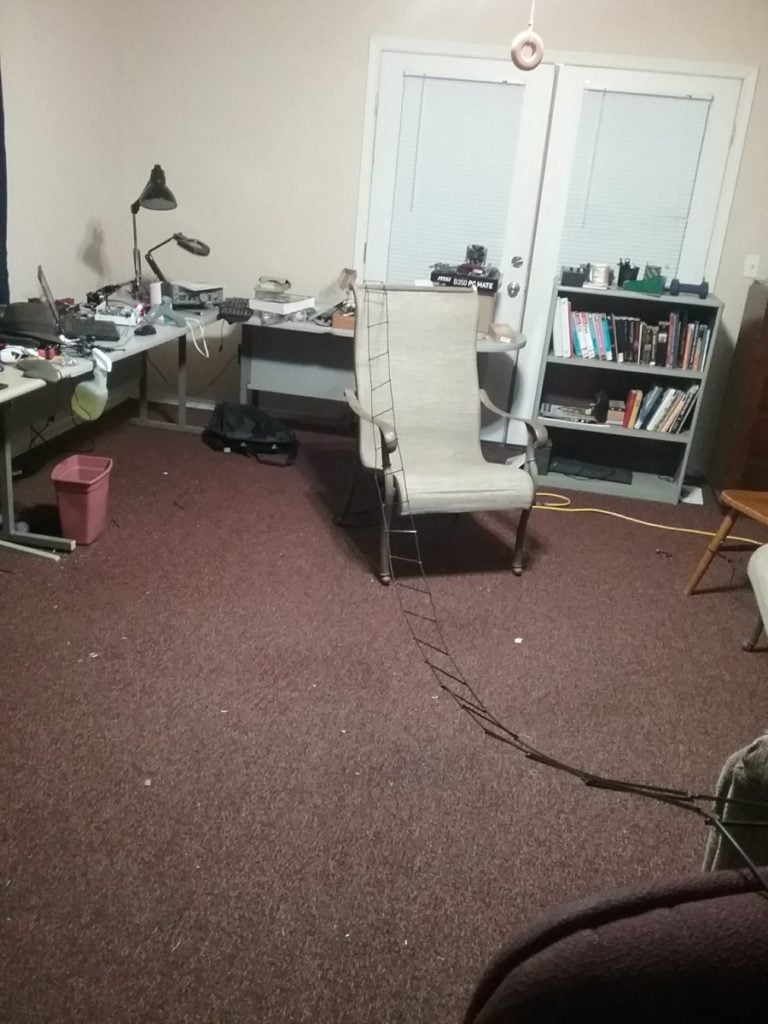 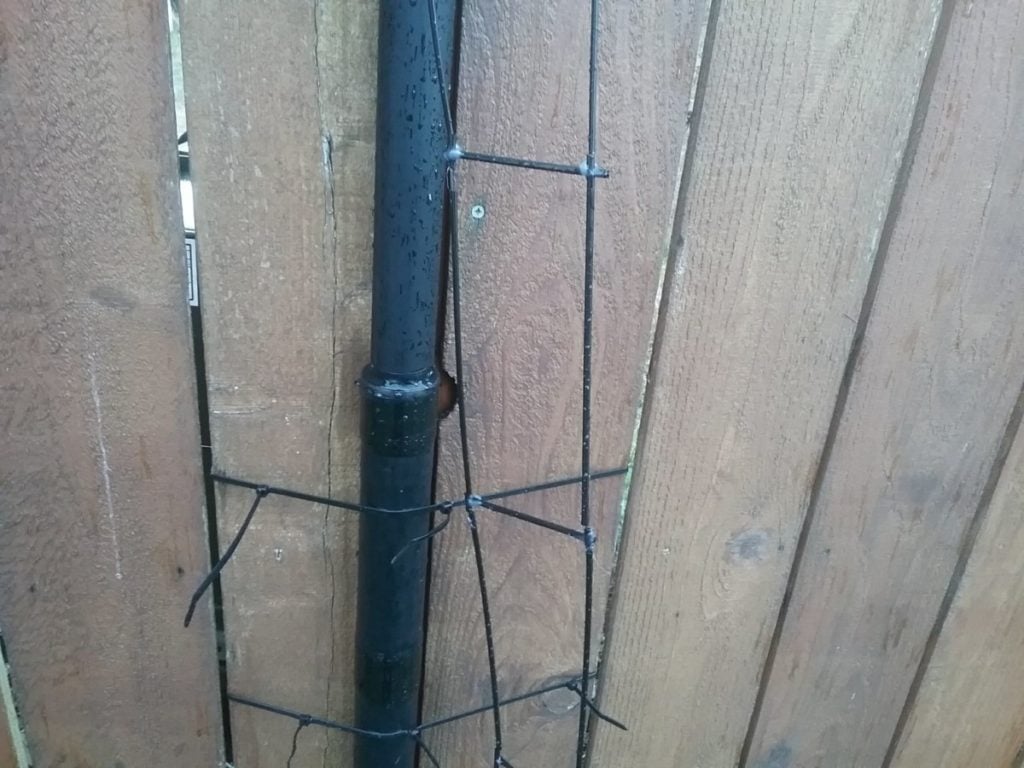 If I were to rebuild this, I’d use half of the ladders and only use one full length stirrer per section, so that the one half of the ladder was all straw-rung-straw-rung, and the other half was bare wire just held away by the rung. It would be lighter. But this worked fine as it was and I’m quite happy with it.

At the bottom, I tied the wires together just as the plans call for. A dipole center was used to connect the coax. That too was home made with hot glue and some hardware, and works great. Hot glue is a good lightweight building material that is wonderfully waterproof. The ladder line is robust enough that if some of the rung spreaders break, it’ll still perform fine. At the top I made it slightly stronger with more straws, hot glue, and zip ties, and hung it on my 31′ Jackite pole.

The far ends of the antenna are not full height, so I left the Jackite pole up 31′ instead of the as-designed 25′ of the G7FEK garden HF Antenna.  It’s not quite as good with the ends drooping down in a slight V shape, but it’s better than anything else I have had.

The last piece of the puzzle, both to increase the effectiveness of the antenna and to keep RF out of the shack, was a common mode choke. I simply wound about 15′ of the RG58 feedline around a Clorox wipe bottle and taped it. A 2L soda bottle would work fine too. Here’s what the antenna looks like fully assembled. The 20M V antenna pole holds up the 8′ section, and another pole holds up the 45′ section using leftovers from a broken $10 ebay pole, and some conduit. 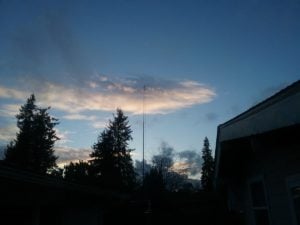 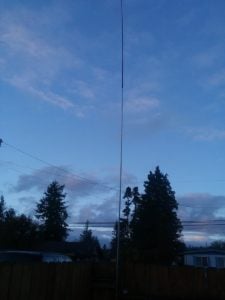 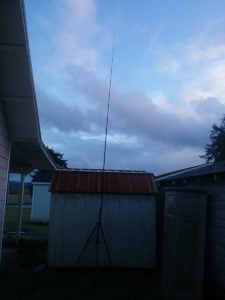 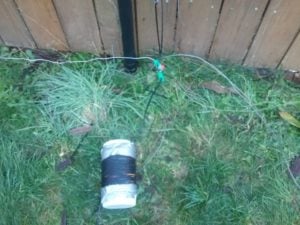 Yes. It works. I’m not going to go into detail about its performance. This isn’t That Kind Of Blog. I’m just going to say that it worked well for me and what I wanted it for. If you build it even remotely correctly, it’ll probably work for you, too! The G7FEK is a great HF Antenna and you’re bound to get good results with it. I’ve worked FT8 in South America, most of the Pacific Rim countries, etc. Mind you those were not at QRP levels, but the nice low radiation angle made it possible. If you build one, or have any comments about your favorite HF antenna, please leave them in the comments below!