Building an RF Probe for Fun and Measurements

Who needs an RF probe?

Among the many things I’ve learned about ham radio, one of them is that you need test equipment. You can do a lot with a standard Digital Volt Meter, but one thing you can’t do is look at an RF signal in an HF radio. For that, you need an Oscilloscope. Or do you? RF is just AC current, and your Digital Volt Meter has an AC setting right? It does. But, it’s designed for 60hz AC mains, not for signals at several Mhz. So we must build a circuit to rectify the High Frequency AC signals in an HF Radio into DC, and then measure that.

Thanks to the fantastic work of Monty Northrup, N5ESE, it’s easy to build an RF probe using his plans. The theory of it is all on his page, and I highly recommend you look at it. What I aim to show you is how any knucklehead like me can build an RF probe that works. Let’s get to it! 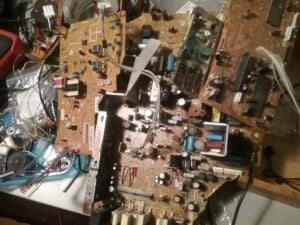 The average radio home brewer has a vastly stocked junkbox that would rival even the best parts house. At least, that’s what most articles would have you believe! I do not have such a junkbox, but what I do have is several circuit boards that I salvaged from old CRT televisions. These are a fantastic source of parts, and are very easy to get for free.

The N5ESE RF Probe circuit calls for a 1N34A germanium diode, a .01uf capacitor, and a 4.7MΩ resistor. The capacitor and resistor were easy to find, but I’m fresh out of germanium diodes. But is that the only part that’ll work? If I’ve learned anything it’s that most parts can be substituted for another. On the TV board (pictured left) were many small diodes of various sorts. I de-soldered several diodes, and decided to simply test them to see if any were more suitable than another. I got lucky and one of the ones I tested only had .3v drop across it, so I used it. The markings on it are too small for me to see, but it would work well enough. My goal was not to have an absolutely accurate measurement, but rather a relatively accurate measurement.

I built the circuit on perforated prototyping board. I love these boards. They’re pre-tinned and are super easy to build circuits on. Plus they work great with SMD components! I love them and highly recommend them especially for the low price they’re available at.

The result is that it works! To get the best use out of it I need to buy some RG-174 and built it into an enclosure. I soldered its probe, which is just 16ga wire, to the item being measured so that my hands wouldn’t pick up any stray RF. It measured voltages well within the range of voltages expected at each range and worked a treat for my purpose of checking the RF amplification stages at different frequencies in my Bitx40. And for that, it worked great!

The N5ESE RF Probe will be a useful tool for home brewing RF circuits in the future, too. It’s no replacement for an Oscilloscope of course. But until a free oscilloscope lands in my lap (which happened 20+ years ago, but I was not able to hold on to it very long, sadly) I will continue to use this RF probe. Happy… uh… probing!? Yeah. Happy probing! 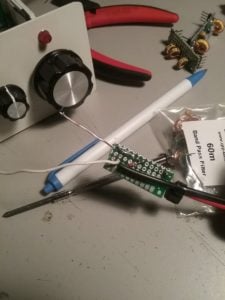 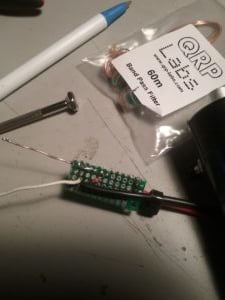