A One Man Mission to Restore a Historic Sailing Yacht

Imagine for a moment that you were somebody who’s been building and crewing boats as a career for some time. Now, you have the opportunity to buy a boat that needs some work.

But it’s not just any boat that needs work. It’s a hundred and eight year old sailing vessel called “Tally Ho”. What’s more is that it’s been sitting in a shipyard in Oregon for the last 20 years rotting under a cover. 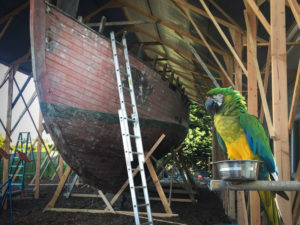 The people who own the property where Tally Ho was stored made the decision to get rid of the boat one way or another. It would either be put into the hands of somebody who wants to fix it up or store it, or it would be destroyed. Keeping in mind that it is often said that a boat is a hole in the water to pour money into, you carefully weigh the idea. This is the part where normal people think to “gosh it’s too bad that that old boat is going to be destroyed!”

Leo Sampson of Sampson Boat Co. is not a normal person. Knowing full well what he was getting in to, he decided to throw caution to the wind and purchase the Tally Ho. Oh and did I mention that he doesn’t live in the U.S.? No stranger to international travel, Leo came to the US to examine the Tally Ho, and decided to take on this giant restoration project.

In his incredible YouTube series he details everything from finding the Tally Ho, transporting it to its current location, building a shelter around it, dealing with bureaucracy, wood, years of accumulation of stuff, and having to build his own living quarters. And he does it with a smile! His vast knowledge, friendly attitude, and high quality videography are a joy to watch. Leo really knows how to make something that I know nothing about completely interesting and enthralling. There’s plenty to geek out about in this series: tools, history, science, you name it!

Go check out his series on YouTube and prepare spend the next several hours glued to your screen. Enjoy!