A One Man Mission to Restore a Historic Sailing Yacht

On a recent trip to go see Weird Al’s Ridiculously Self-Indulgent, Ill-Advised Vanity Tour (which was amazing by the way!) I had some car trouble. My Corolla just would not start. Sometimes it did fine, but other times, it simply refused to turn over fast enough to start.

Getting Home with a dead battery

Being 250 miles from home, I couldn’t just call a friend to give me a jump. Thankfully, a stranger gave me a jump and I used my phone to navigate to the nearest auto parts store. I was fairly certain I needed a new battery, but I about died when I saw the cost- $130 for a new Group 35C Battery? Ridiculous. I refused to pay AutoZone prices. But, I still needed to get my car started so I could navigate around town, and, oh yeah, get home.

Being the owner or caregiver of 3 older vehicles (88 Suburban, 2001 Corolla, 2003 Windstar) I decided to buy something that could benefit any of them, and would also fill my basic need for the moment. And, it was less than half the price of a new battery: A Portable Car Jumper/Starter. These are basically jumper cables attached to a battery powerful enough to start your car, so you don’t have to carry a set of jumpers and beg strangers to jump your car if it doesn’t start on its own.

Unfortunately I was in a bind and had to pay $60 for a unit with a Sealed Lead Acid battery in it.  It has a few other emergency minded features, none of which I expect to use.  It also requires a very specific construction-style extension cord because its power plug isn’t on a cable- it just sticks out the back, recessed in a depression in the casing. Just a ridiculous, cheap and crappy design. Thankfully, it worked however! I was able to start the car again, and get it home without any trouble. For that reason, it was worth the cost, but there are better deals if you shop when it’s not an emergency.

If you decide to get one of these life savers, do not go down to your local store and spend 40% more than needed. In fact, for just $10 more than what I paid, Amazon sells  Portable Car Jumper/Starters that have lithium ion batteries and are more compact and more powerful. I’d have bought one of those if I had had the opportunity.

I did figure out that the battery was toast, though. One of its cells was reversed, and so I did what I consider to be the eco and wallet friendly thing: I bought a battery that fit the car from an auto wrecker for $25. The battery was 2 years old and worked fine. Two weeks later, I sold the car, and I am confident that the battery will serve its new owner well.

Enter my daughters 2003 Ford Windstar. It has had intermittent starting issues since we got it, and she is the main beneficiary of the  Portable Car Jumper/Starter these days. It typically only has issues in the winter when temperatures drop, but this spring the temperatures are up, and the issues still exists. I put in a new alternator a couple of years ago, but it still has issues It starts sometimes, not others, and it’s completely inconsistent. Or so we think. She carries the Portable Car Jumper/Starter with her just in case.

I need to diagnose the issue, and I’m not always there to measure voltages and see what’s going on. The car instrumentation has no voltage or amperage indicator, and so it would be hard to see what’s happening every time.  So, what I’ve done is wired a 12v accessory plug like the one shown on the left to a Harbor Freight freebie multimeter. Then I’ve made a log book for my daughter to fill out every time she starts the car. It’ll be a pain for a few days for her to remember to do that, but I should fairly quickly have the data I need to make a decision. Does it need a new battery? A new Alternator? Is there an electrical problem? I hope the numbers will tell me what I need to know. Already, measuring the voltage has indicated a possible problem! 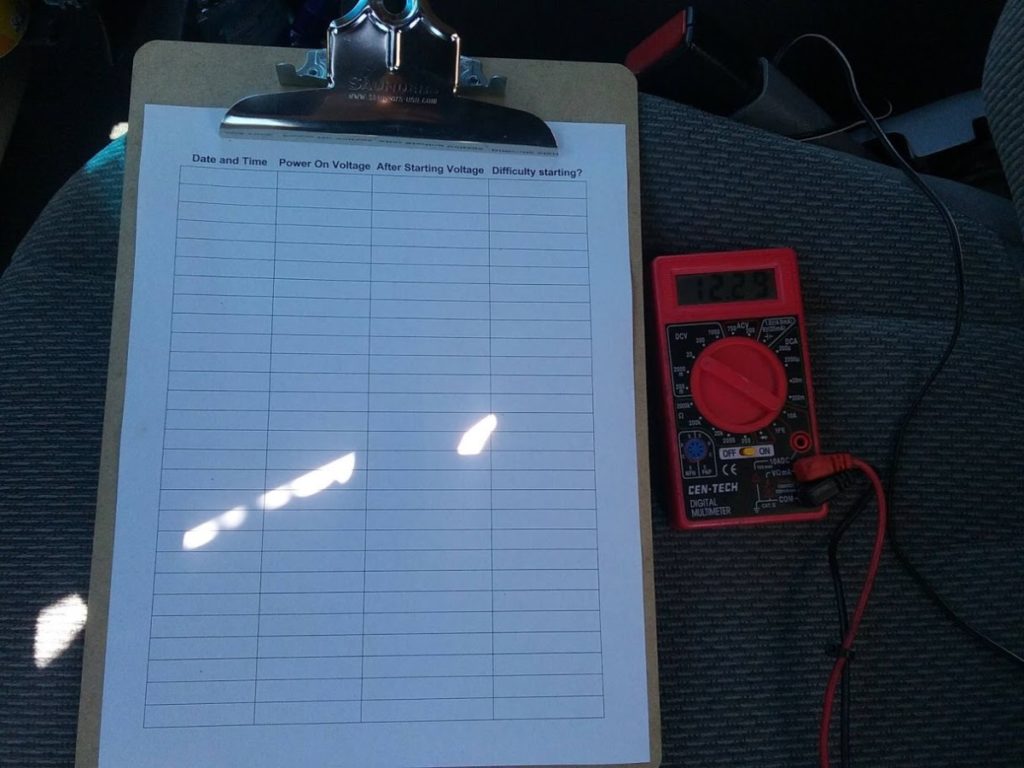 That’s only 12.29 volts, which according to this chart found at http://www.fordforumsonline.com/threads/charge-your-battery-and-check-drains-on-the-electrical-system.202/ is only about 65%:

As I was writing this, I got an idea, and grabbed my other multimeter- the Innova 3320 that I talked about in my other post “An Inexpensive Digital Multimeter for the Thrifty Ham” and checked the voltage. It was much lower- 11.9 volts, but it’s been an hour or so since I checked it at 12.29 volts. I noticed the voltage decreasing 1/100th of a volt about every 3 seconds, so I disconnected the negative terminal from the battery. The drain stopped.

I switched the Innova 3320 to Ammeter mode, and checked the amperage that was being pulled. 5.5A were being taken from the battery with the car off. Oh no! Oh, wait. The drivers side door is open, illuminating all interior lights. I closed the door, and it immediately dropped to about half an amp, and if I could have left it connected a while, I think it would have dropped to less, as the timed interior lights turned off.

So, our data gathering experiment will tell whether this is a battery, alternator or other problem. I strongly suspect the battery to be bad. We’ll see!

The very next day, I had all the data I needed. A friend came over with a battery hydrometer, and we checked the health of each cell in the battery. They weren’t in the red, but they weren’t in the green either. Some cells were better than others, though that’s expected. On a whim, I checked the voltage- 9.6 volts! Anything below 10.5 is a dead battery. I also paid more attention to the date on the battery. It was just over 5 years old. It’s amazing that this battery was still starting the car. I drove down to Costco and picked up a brand new Interstate battery for $95, which is as good a deal one will get anymore. Since then the car has started so much better, and without a hitch, every time.