The Quest for the Genuine IRF510

Converting the BITX40 to 20M

[UPDATE 11/14/2017]: After even more experimentation, I have concluded that this method works great for the Band Pass Filter, but that the BITX40v3’s PA is not optimized for operation above 40m. It will work on 20m, but at reduced output of only 1 watt. The following information is left for EXPERIMENTAL DOCUMENTATION ONLY and I was premature to call it “working”. Its close, but not quite there. I’m still working on a better way to get on 20m with the BITX40v3

In a Previous Post, I wrote about adding an 80m Band Pass Filter and switching it out for the 40m filter, essentially adding a second band to the BITX40. That works great, but after I added the 80m band to my BITX40, I realized that I also wanted the ability to add other bands. Now, I can swap the 80m BPF for a 60M BPF and have access to that band as well, but I want access to higher bands. I have a small lot, and the higher bands mean smaller resonant antennas. So the decision was made to convert the BITX40 to 20m by building on the previous conversion and switching out the Low Pass Filter in the same manner.

You may have many of these parts on hand. Feel free to substitute!

First, have a read through the 80m dual band article to see how we went about adding a 80m Band Pass Filter, because we’re doing to do the exact same thing for the Low Pass Filter.

For the Band Pass Filter addition, we simply connected the outputs of both filters together, and switched only the input (And yes, I know- input/output is arbitrary!) While that last sentence is true for the BPF, I have found that it is not true for the LPF.

Next it’s time to separate the 40m Low Pass Filter from the rest of the circuit. Have a look at the BITX40v3 Schematic and you can see that the LPF starts at C160 and ends at c163. Look at the BITX40v3 board and you can see a single trace between c155 and c160. That’s a perfect spot to make a cut so we can switch the inputs between this LPF and the QRP Labs LPF. Use your hobby knife, pocket knife, or whatever you have to cleanly cut that trace. 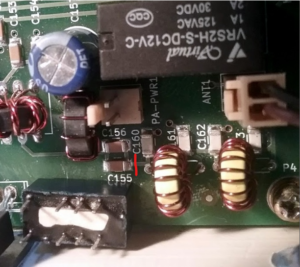 Cut at the Red line

DO NOT DAMAGE C155 or C160! Leave plenty of room, because you’re going to need to solder to both of those. Check that there is no longer continuity between C155 and C160.

Next, there is a slightly more delicate operation. You’ll need to cut the trace immediately after the LPF, abrade the trace leading to the relay without cutting through it, and tin the trace with some solder. If you’ve never done this before, try it on any old circuit board until you’re comfortable doing this on your BITX40. [Pictures forthcoming]

Next we have to physically mount the QRP Labs 20m LPF. I used an old floppy drive cable end as a socket for the LPF, and so I can switch it for any other band later. Use your Digital Volt Meter to check for continuity to pins and their corresponding wires on the cable, and trim the rest of the wires off. Leave the wires plenty long to give yourself room to work with them. We’ll trim them later. See the 80m dual band article for details. You’ll only need one ground wire. You’ll have the input, output and ground wires. Check for continuity to your LPF that you’ve assembled.

Now it’s time to mount the filter socket. I used high temp hot glue and mounted it to the 12v TX relay and the cap next to it, c157. Use enough glue that it covers the gap, we don’t want it coming loose later and damaging the filter.

Finally, we need to do a bit of soldering. Trim plenty of insulation back, and tin all wires first, and then trim the tinned wire so that it’s just long enough to make the needed connections. When soldering to the SMD parts, just warm up both parts together, don’t overdo it. Give each connection the ‘tug test’ to be sure it’s not a cold solder.

Keeping leads as short as possible, connect the LPF ground to the ground side of C161 or C162. Solder a 22-26ga jumper between C155 and the neutral pole of your relay. Another jumper goes between C160 and the Normally Closed pole of the relay, and the input of the 20m LPF goes to the Normally Open pole of your relay. Make all connections as short as possible. The end result will look something like this: 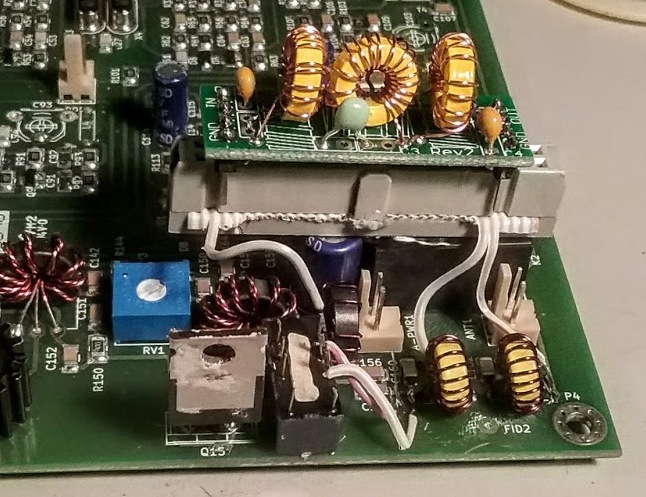 Solder a wire from the neutral pole of the other side of the relay to the tinned trace near the antenna connector. Connect the 20m LPF output to the Normally Open pole of the relay, and run another jumper from the Normally Closed pole to the output of the 20M LPF, or the outside of C163. This will switch both sides of the LPF through the relay.

For the Band Pass Filter, do all the exact same things to the BPF on the BITX40v3 board, as outlined on the dual band article, using a the 20m BPF instead.

Now you’ve got to switch the relays on (20m) and off (40m). You can do this manually with a switch on your radio, or you can modify your raduino so that it automatically switches the relays when you switch to the 20m band. Either way, the raduino code has to be altered to allow it to have a positive offset at 14-14.3mhz. I personally use a QRP Labs VFO kit, and it has memory functions that automatically turn on a relay output when I select a 14mhz memory location. The outputs are only 28ma, so I used the spare side of the BPF relay to switch on a direct 5v connection between the 5v voltage regulator and the LPF relay. I ran the wire under the board, and it works great. You may wish to do something similar.

By switching both sides of the LPF, no PA adjustments are necessary.

Here’s the complete conversion. You’ll notice that I used a 4 pin connector to connect the relays to the VFO and 5v supply. One of the pins is blocked, effectively keying it so it can’t be plugged in the wrong way and blow something up. Two pins are for the BPF relay, and one is for LPF power switched through the BPF relay. The LPF relay is grounded on a nearby ground connection.

So you’re probably asking at this point “How does it work?” I’d say it works great! I don’t have any hard numbers to provide. I’m Not That Kind of Ham. Empirical results are good enough for me most of the time (even when they shouldn’t be… I’m learning the hard way sometimes!) My primary use for the BITX40 is digital modes such as JT65, FT8, and WSPR. I’ve been spotted in Japan, New Zealand, European Russia, and many states after just a few days of use, and that’s largely due to the fact that I have room for a 20m inverted V dipole, but my 40m antenna is a longwire. A resonant antenna helps a lot, and so for me it’s a big part of how well this works.

That’s up to you! You can add more bands by swapping out filters, and if you want to go really crazy you can add more and more bands using similar methods of switching out the filters. You could probably get away with using a 15m LPF and 20/17/15M BPF’s and just switch out the BPF’s according to your need. Your imagination is the limit. Oh, and FCC rules. Those too!

Do you have a BITX40 converted to 20m or any other band! Let us know in the comments how you went about it.

Here’s a video tour of the modifications: