Slashdot is officially Dead to me. 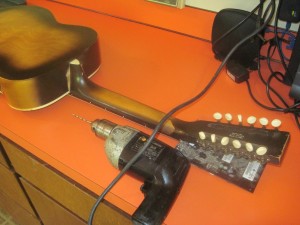 Although it isn’t legitimately a “Stella” guitar, I sure do like the name. So it’s staying. In Part II, “Pain in the (guitar) neck reset” I explained the problem with the neck and how I was going to go about fixing it. In Part III, “Kamikaze” Neck Reset, I showed you how I used a saw to perform caveman surgery on the guitar to get the neck straightened out some. In this installment, we’ll take a look at the final touches and find out if we were successful. Or, if I was successful. We’re not a royal family. Or, I’m not a royal family, I mean. Something like that. Whatever. Anyway…

The first thing to do was to get a pilot hole drilled in the neck and try to make it straight, and hopefully centered on the neck. I got it straig 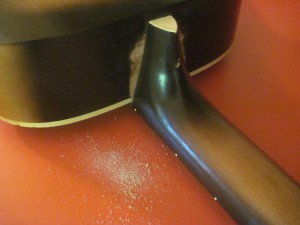 ht, at least. I started with a 1/16″ drill bit and was a bit off center, but oh well. It was close enough to work. I stepped it up to a 1/8″ bit, and after propping the nut (the far end of the neck by the tuners) on an old sound card (it was handy) so that a little pressure on the back of the guitar would close the gap in the neck, I drilled as far into the guitar as the 1/8″ bit would go. It turns out that the depth of the hole was almost as deep as the length of the drill bit, which was just under 3″. I didn’t want to drill too big of a hole with a bigger, longer drill bit if I didn’t have to, so I stopped there and made a run to the hardware store, to see if I could find a 3.5″ long 8×32 bolt and assorted hardware.

They didn’t, and it was fine.

When I returned I had a 4″ 10-24 bolt, four washers, four nuts, a lock washer, and a wing nut. Don’t worry, I’m not completely crazy. You’ll see why I had all that stuff in a moment. I checked my drill bits and a 3/16″ bit was just barely larger than the 10-24 bolt, and so I drilled out the hole. I put a washer on the bolt (which has a Philips head) and tightened it down with a nut. I left about a quarter inch of thread, then added another nut, washer, and another nut, tightening the nuts against each other with the washer in between. Don’t worry, this will make sense later. Keep reading. Then I added another nut, and put it into the neck.

Inside the guitar on the bare bolt went a washer, a lock washer, and the wing nut. This was not easy as the strings were still on (although loosened completely and moved to the side so I could get my gigantic hand inside the guitar.) I cinched it all down, and tightened it as tight as I could get it, since I didn’t want to strip the bolt head and I couldn’t keep the wing nut from spinning all that much. It doesn’t take much to get the clamping force needed, however.

Is the guitar perfect? No. It still has fairly high action compared with a high quality guitar. I even removed the bolt and sanded more out of the joint. Suffice it to say, it has its limits. But it’s playable, and sounds very nice and will sound even better after I replace the strings, which took a beating while I was sawing on it [Edit: I replaced the strings, and it sounds wonderful!] The pick guard is about to fall off, and so I’m trying to decide if I’m going to just glue it on, or if I’m going to replace it with something unique. Suggestions welcome on that one! 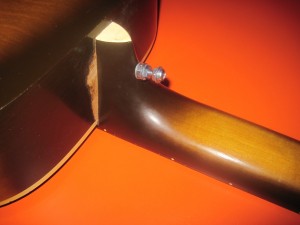 I also checked the intonation of the guitar. If a guitar is intonated correctly, then playing on the 12th fret (half way between the nut and bridge) will give the same note as if it were played open. This indicates that the 12th fret is exactly half way between the nut and the bridge, and no adjustment is needed. Because I didn’t cut the neck off completely, the distance didn’t change, and so the guitar is perfectly intonated without any further modification.

Now, what was all that business with stacking nuts and washers about? You guessed it: guitar strap attachment! It’s the perfect place for it and it makes use of the extra length of the bolt. I tried my strap on it and it works great, and the guitar actually plays. I think I’m going to leave it strung up as a six string for the time being, as I really do like it just as it is.

Update October 2019: I play this guitar regularly, and the repair has held just fine. The guitar has a nice sound, and while not the best guitar I own, it is enjoyable to play and was worth repairing. Thanks for reading!