Last week I talked about Going Digital with JT65 on the BITX40. In that article I mentioned that to key the radio automatically either a computer interface  or a Vox circuit would be needed. It was my intention to use a vox circuit.

I posted to my usual haunt, the BITX40v3 group on Facebook and asked if anyone could recommend a vox circuit to use. Terry (VE3TKB) recommended the N1HFX vox circuit, and I thought it looked simple enough that even a dummy like me could build it.

The last thing I wanted to do was go to Mouser or Digikey (both fine vendors) and order one of these and two of those, and buy $3 worth of parts for $8 shipping, and then wait days or weeks for them to arrive. Instead, I’ve been collecting circuit boards and and have a soldering iron and solder braid handy!

The schematic calls for a 1458 dual op amp IC, but I had no such thing. Instead I found three 2904D’s on a board that came out of my old CRT television that hasn’t made it to the recycler yet. The datasheets look strikingly similar, and another query to the Facebook group found that folks have been interchanging them for some time now. Wahoo! Now just to find the necessary NPN transistor, and various capacitors and resistors, and a diode.

I continued raiding boards for the resistors that I couldn’t find in my kit of already-salvaged parts, and found everything I needed. I could only find one 33K resistor, but a 30K resistor was close enough and worked fine. I had all the parts listed in the schematic, so I set to work deciding how to build it.

The Build: Round One 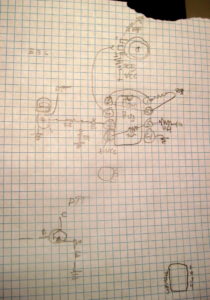 I went to my parts drawers and pulled out the rest of the things I needed to get started. I decided that since I want to eventually build a transceiver from scratch, I may as well start getting used to the Manhattan style of building, so that’s the route I took. I grabbed a 20cm x 15cm PCB to build on, and a 10k potentiometer since I had one in there too.

I drew out careful routing of each component, labeled everything just perfectly, and tried to plan out where I’d need islands (electrically isolated areas) on the PCB. Then I scored the PCB with a knife and broke off about a 1/4″ wide section of the short end of the PCB, and then broke that into several smaller squares- now I had my “islands” to build with.

After hours of salvaging and sorting parts, drawing bad circuits and soldering and hot gluing, I had my first actual scratch built circuit.

The Build: Round Two

I was getting pretty disgusted with myself, and at this point had spent many hours on the project with nothing to show for it except for a collection of parts flying in the wrong formation, apparently.

After careful examination, I realized that I’d made a mistake in the pin assignments on the op-amp, and so I fixed that and even replaced the op-amp. Still no worky. I started checking resistor values, and didn’t like what I saw. My careful planning wasn’t careful enough, and values were all wrong.

I concluded that it was time to start over. I removed all parts from the PCB, and re-sorted the resistors and found that about half of them were the wrong value. I got all of that straightened out, and then grabbed the third op-amp from the salvaged TV board. I think I fried the first one, the second one broke a leg, and I wanted a fresh start.

This time I laid things out as simply as possible and somewhat differently than before. Instead of drawing it out, I simply followed the schematic. I applied power to the finished product, and measured voltage on the island that the PNP transistor outputs to. I spoke, the voltage changed! It worked!

Next up, I had to try to integrate it into my radio. I was getting tired and not making a lot of sense even to myself, and so I will skip all my experiments, and tell you what I ended up with.

Darlington To The Rescue

I decided that a relay would be the easiest way to integrate the Vox with the BITX40 PTT. I grabbed a relay from my parts bin, and while it’s one that’s much bigger than needed for the job, it’s the one I had. The only problem was that the transistor in the vox circuit didn’t supply enough current to energize the coil, and so the relay never really latched. 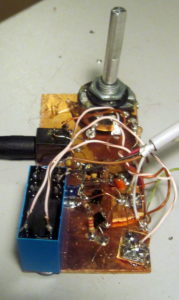 It’s a hot mess of wire, solder, and hot glue- but it works!

I knew that Darlington transistors were just two transistors in the same case, so I added a second transistor (S8050) in a Darlington arrangement. I connected the relay, and this time- it worked! It latched beautifully and reliably.

Connecting the Vox to the BITX40

The audio out from the PC was wired directly to the vox circuit- ground go ground, the positive output to the Mic connection on the vox. The PTT was wired to the relay, and another connection was made to the BITX40- ground to ground, mic hot to mic in on the BITX40.

Success! While audio isolation transformers are preferred, they aren’t absolutely necessary for this to work, and for now I’m not using any. The PTT is isolated by the relay, which was my main reason for using it. Now, when I use JT65, or any other mode, I don’t have to manually PTT- Transmitting is just a click away- no USB to Serial adapter needed. Because I used salvaged parts for the build, my entire outlay is just a couple of dollars.

Next up, I’ll be integrating it directly into the BITX40, where the potentiometer will be replaced by a normal sized pot with a knob, and a switch will enable/disable the vox circuit.